India`s annual economic growth probably moderated to 7.4 percent in the July-September quarter, according to a Reuters poll, weakening just as Prime Minister Narendra Modi`s Hindu nationalist led-government gets set for an election due by May. 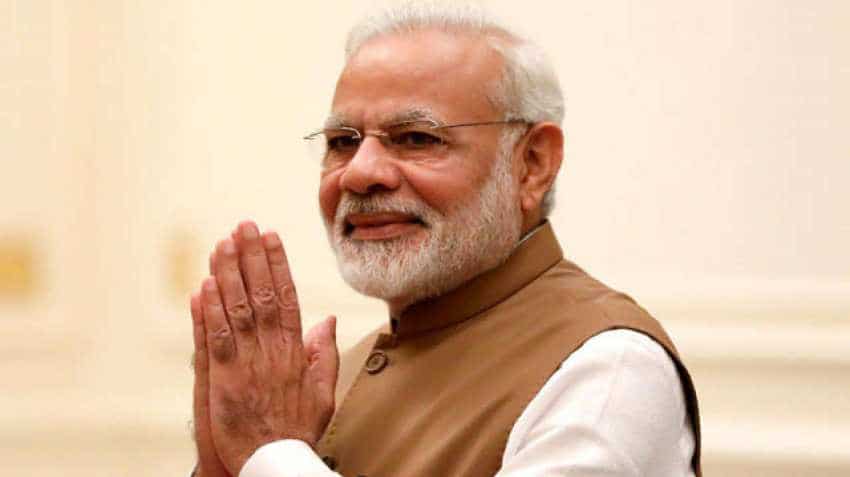 The Reserve Bank of India has forecast economic growth of 7.4 percent for the financial year ending in March, recovering from 6.7 percent in the previous year, slowest in four years. Image Source: Reuters
Written By: Reuters
RELATED NEWS

India`s annual economic growth probably moderated to 7.4 percent in the July-September quarter, according to a Reuters poll, weakening just as Prime Minister Narendra Modi`s Hindu nationalist led-government gets set for an election due by May.

That is still faster than China, but a come down from the more than two-year high of 8.2 percent set in the June quarter and some economists foresee the slowdown continuing though to the election at least.

"The economy is likely to slow down in the second half of the current fiscal year (ending in March)," A. Prasanna, chief economist at ICICI Securities Primary Dealership in Mumbai said.

Prasanna was cautiously optimistic about the outlook, but much would depend on the election outcome. "Any signs of political uncertainty could affect market and business sentiment," he said.

Meantime, while the growth rate may look respectable, the weakening trend is worrying as India needs growth of 8-percent-plus to generate enough jobs for the more than 12 million young Indians entering the labour force each year.

Having swept to power in 2014 promising to galvanise the economy, Modi has been criticised as even in the good quarters the unevenness of India`s economy has meant that growth in jobs hasn`t kept pace.

The unemployment rate rose to a two-year high of 6.9 percent in October, and 29.5 million youth were looking for jobs, according to a report released earlier this month by Centre for Monitoring India Economy (CMIE), a Mumbai based think tank.

Several factors conspired to hold the economy back during the middle of this year, namely; a weak rupee, and a squeeze in India`s shadow banking sector that hindered both investment and consumption.

At least one handicap has been removed as oil prices have come down sharply from their heights of earlier in the year. But data for industrial production, vehicle sales, and tourism arrivals has made disappointing reading.

"India`s growth is likely to soften in the September quarter, given the dismal consumption and investment trends following a liquidity squeeze in the shadow banking sector," said Charu Chanana, emerging Asia economist at Continuum Economics in Singapore.

The gross domestic product data will be released on Friday around 1200 GMT. The Reserve Bank of India has forecast economic growth of 7.4 percent for the financial year ending in March, recovering from 6.7 percent in the previous year, slowest in four years.

On Wednesday, a government panel announced a revised growth estimates that made the Modi administration`s record look better than the previous Congress-led governments.

Having estimated back in August that the Congress oversaw an average annual growth rate of 8.1 percent during its decade in power, the Statistics Ministry revised that number down to 6.82 percent for 2005/06 to 2011/12 period, putting it well below the 7.35 percent average for the first four years of Modi`s term.

Some economists expect economic growth could slow to around 7 percent in the second half of the current fiscal year due to state spending cuts, muted rural demand, and the statistical impact of higher growth in the same period a year ago.

A report released earlier this week by the State Bank of India, the country`s largest commercial bank, said the government could cut its spending by 700 billion rupees ($10 billion) to meet budgeted fiscal deficit target of 3.3 percent of GDP, as it fears a shortfall in tax collections. A fall in food prices has hit rural incomes in recent months, which in turn has dampened sales of consumer durables and other products.

More positively, the recent drop in inflation and oil prices and the rupee`s recovery against dollar have removed pressure for an increase in interest rates, and a Reuters poll of economists predicted that rates will be left unchanged when the central bank`s monetary policy committee meets on December 5.