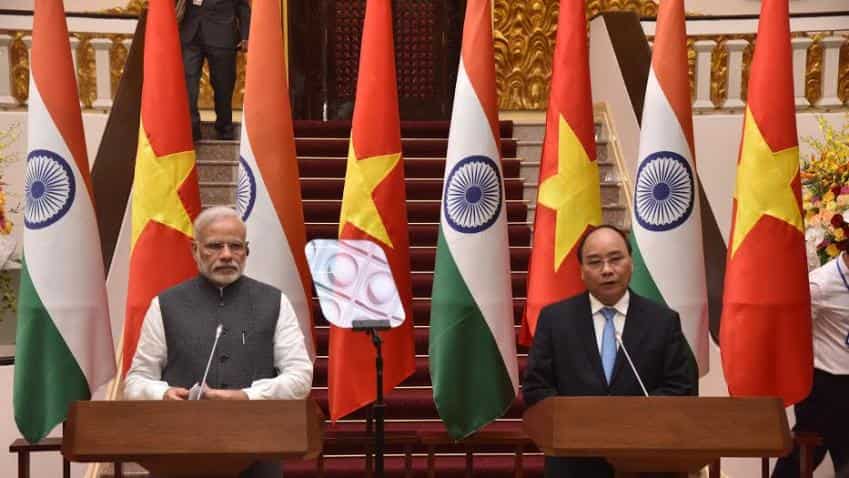 India and Vietnam on Saturday signed 12 agreements in a wide range of areas covering defence, IT, space, double taxation and sharing white shipping information, signalling a strong upward push in their strategic ties.

The agreements were signed by officials of the two sides in presence of Prime Minister Narendra Modi and his Vietnamese counterpart Nguyen Xuan Phuc in Hanoi.

Vietnam has shown a keen interest in air and defense production. India's Larsen and Toubro (L&T) will build offshore high speed patrol boats for Vietnamese Coast Guards, while an agreement was signed on programme of cooperation in UN peacekeeping matters.

Indian Navy and Vietnam Navy will cooperate in sharing of white shipping information.

The pacts included agreement on exploration and uses of outerspace for peaceful purposes, agreement on avoidance of double taxation, health cooperation, IT cooperation, cyber security and agreement on contract and design, building of boat in India, equipment supply and technology transfer.

In addition, meamorandum of understanding (MoU) between Vietnamese Academy of Social Science and Indian Council of World Affairs, MoU between BIS and STAMEQ for mutual recognition of standards, agreement on setting up of sustainable IT Infra for advanced IT training and protocol between Vietnam and India on celebrating 2017 as 'The Year Of Friendship' were also signed.

Swarup quoting PM Modi said on Twitter, "We agreed to take several decisions today to move on the pledge of our partnership."

PM @narendramodi: We agreed to take several decisions today to move on the pledge of our partnership pic.twitter.com/PefqpVic2n