He said over the past three years, the Indian government has resolved a number of regulatory and policy issues facing businesses, investors and companies 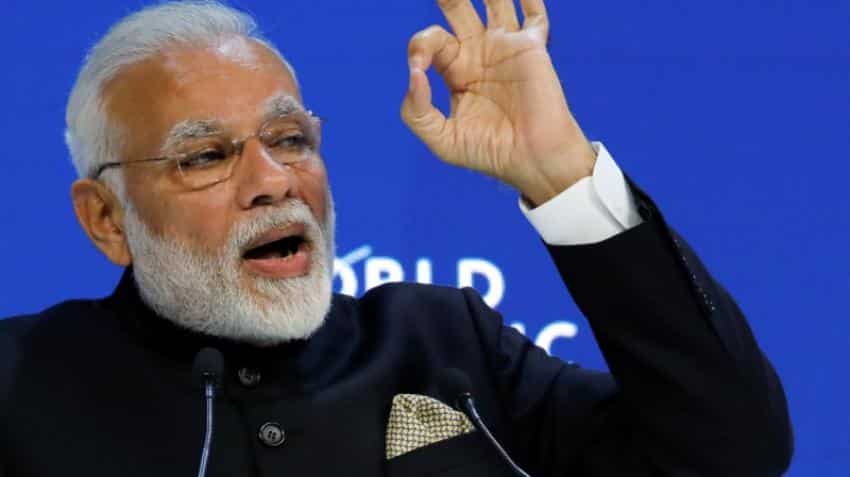 More than 90% of the FDI approvals have been put on the automatic approval route. Image source: PTI

Prime Minister Narendra Modi today said India`s reforms have touched almost all sectors and the country is set to become a $5 trillion economy by 2025, riding on its vast market and strong and stable fundamentals.

"Our present development agenda is based on five pillars. First and foremost, we do understand that our systems need to change. Hence, we are persisting with far reaching structural reforms. Thus, our first pillar is our mantra of reform, perform and transform," Modi said at the plenary session of the World Economic Forum.

He said that over the last three years, the Indian government has resolved a number of regulatory and policy issues facing businesses, investors and companies.

Indian Prime Minister Narendra Modi said Tuesday that globalisation is "losing its lustre" but warned that new trade walls are not the answer.

Modi told the forum that India should serve as an example as it opens up to foreign investment, in a speech that delved into Hindu scripture and echoed an anti-protectionist clarion call issued in Davos a year ago by Chinese President Xi Jinping, as Trump prepared to take office.

"It feels like the opposite of globalisation is happening. The negative impact of this kind of mindset and the wrong priorities cannot be considered less dangerous than climate change or terrorism," Modi said. He is the first prime minister to attend the summit  at Davos since 1997.

Modi said that technology-driven transformation is deeply influencing the way we work, behave, the way we talk to each other.

PM said that "this technology-driven world has influenced all aspects of our lives."

PM said that he will only talk about the three gravest threats that humans face today. The first is climate change. Extreme weather conditions are rising by the day and the world should come together, he adds.

He said,"in 1997, India's GDP was $400 billion, but after two decades now it is 6 times." He also added, "I would like to congratulate the WEF president for making Davos a platform for global discussion."

In his speech, he said that "we in India are proud of our democracy and diversity. Democracy is not a political system in India. it is a way of life." He also added,"125 crore Indians are capable of creating a $5 trillion economy by 2025. In 2014 after 30 years, the 600 crore Indians provided a complete majority to any political party to form govt at the center. We took the resolution for the development of everyone and not just a specific group. Our motto is 'Sabka Saath Sabka Vikas'."

Addressing a roundtable before a dinner meet on the sidelines of the World Economic Forum (WEF) gathering yesterday, Modi narrated India's growth story.

He was accompanied by top government officials including Secretary (Economic Relations) at the External Affairs Ministry, Vijay Gokhale, Foreign Secretary Jai Shankar and Secretary in the Department of Industrial Policy and Promotion (DIPP) Ramesh Abhishek.

Under the tagline of 'India Means Business', the roundtable was attended by 40 CEOs of global companies and 20 from India.

The spokesperson also tweeted that the prime minister "hosted a roundtable meeting with CEOs of top global companies".

The Prime Minister's Office in a tweet said, "In Davos, PM @narendramodi interacted with top CEOs. He spoke about India's economic development and the investment opportunities in the nation".

RBI should consider moderating its pace of monetary tightening: CII