The Indian government on Friday launched South Asia Satellite GSAT-9 with an aim to provide the one and half billion people of the region with better communication, weather forecasting and tele-medicine. 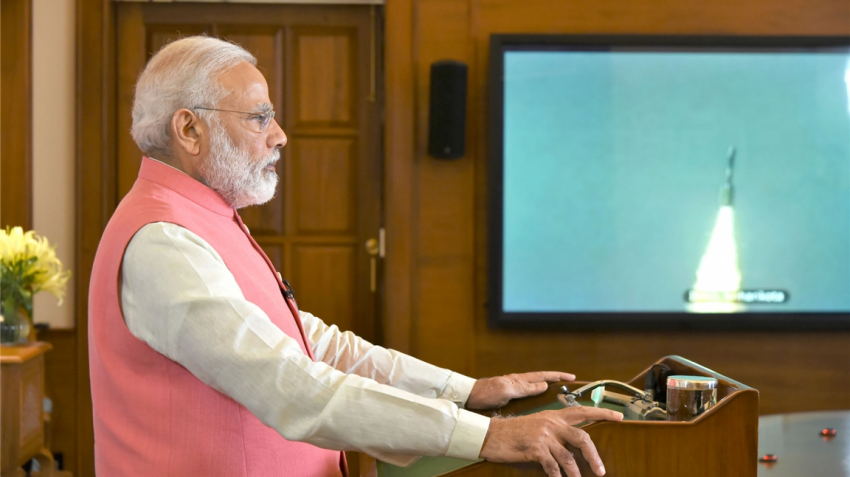 Prime Minister Narendra Modi at the Video Conference with Heads of Government from South Asian Nations, to mark the launch of the South Asia Satellite, in New Delhi on May 5, 2017 Image Source: IANS/PIB
Written By: IANS
RELATED NEWS

India`s space diplomacy took a giant stride on Friday with the successful launch of the South Asia Satellite GSAT-9, a "gift" to its neighbours that is aimed to provide the one and half billion people of the region with better communication, weather forecasting, tele-medicine and response to disaster management.

All the leaders applauded as at 4.57 p.m., the GSLV-F09 rose into the sky from the second launch pad at the Satish Dhawan Space Centre at Sriharikota carrying the satellite. Pakistan had opted out, saying it has its own space programme, forcing a change in the name from Saarc Satellite to South Asia Satellite.

In 2014, Prime Minister Narendra Modi tasked the Indian Space Research Organisation (ISRO) to develop a satellite for use by the Saarc countries.

Costing around Rs 235 crore, the satellite has a life span of over 12 years, and its objective is to provide communication applications in Ku-band for the user nations.

Modi said the South Asia Satellite would go a long way in addressing the region`s economic and developmental priorities.

"Natural resources mapping, telemedicine, the field of education, deeper IT connectivity or fostering people-to-people contact, this satellite will prove to be a boon in the progress of the entire region," he said.

"It is an important step by India to enhance cooperation with the entire South Asia... It is an invaluable gift. This is an appropriate example of our commitment towards South Asia. I welcome all the South Asian countries who have joined us on this momentous endeavour," he said.

Reacting to the launch, Pakistan said on Friday that since the satellite was solely made by India it therefore cannot be called a regional project.

Foreign Office spokesperson Nafees Zakaria said his country has its own space programme at an advanced level and was keen to participate in the project.

But India was not willing to develop the project on a collaborative basis, so it was not possible for Pakistan to support it as a regional project under the umbrella of Saarc, he said.

President Pranab Mukherjee and Vice-President Hamid Ansari on Friday congratulated the Indian Space Research Organisation (ISRO) on the successful launch of the South Asia Satellite, as did Congress President Sonia Gandhi, among other leaders.