How Gujarat migrant crisis has hit industries in Mehsana, Sanand, Himmatnagar and Ahmedabad

Amid the Gujarat migrant crisis, industries in the state are the most worried lot. 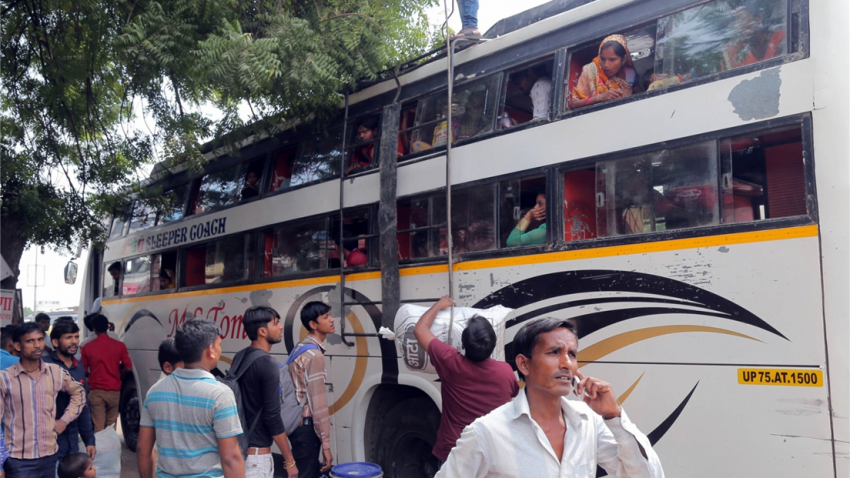 Ahmedabad: Migrant workers from Uttar Pradesh and Bihar leave for their homes, in Ahmedabad on Oct 8, 2018. Violence against the migrants was reported after the alleged rape of a toddler on September 28 in Gujarat''s Sabarkantha district. Image: IANS
Written By: ZeeBiz WebTeam
RELATED NEWS

Amid the Gujarat migrant crisis, industries in the state are the most worried lot. The production has been disrupted in many factories ahead of the festive season as thousands of Hindi speaking migrants from Uttar Pradesh and Bihar have fled the state following attacks by the locals over the alleged rape of a minor girl.

According to a report by DNA, the worst affected districts are Mehsana, Himmatnagar and Ahmedabad where thousands of migrant workers have fled after the violence that erupted following the alleged rape of a 14-month-old girl by a man from Bihar.

Police said that since the alleged rape of a 14-month-old girl in Sabarkantha district on September 28, six districts, most of them in north Gujarat, have witnessed sporadic incidents of violence against Hindi-speaking people.

Gujarat government Monday said it has arrested 431 people in connection with the violence and 56 FIRs have been registered against the accused so far. The state government has also appealed to locals to not engage in violence.

In Ahmedabad and surrounding areas, around 35 per cent workers are from other states. Around 4000 of the 14,000 migrant workers have left for home from Sanand, the emerging auto hub.

Ajit Shah, president of Sanand Industries Association said they have managed to hold back the remaining workers and trying to assure them about their safety. Shah also rubbished claim that the workers were returning due to the festive season.

Shah said that foundries are staring at huge losses as nearly 80 per cent of the workers there are from Bihar and UP.

Factory owners see the migrant workers as diligent and more productive. The workers also don't take many leaves because they stay away from their families.

Jaimin Vasa, president of Gujarat Chamber of Commerce and Industry said they are holding joint meetings with the police, village heads, local officials and industry representatives to assure the migrant workers about their safety.

Business is said to be usual in other parts of the state including Surat, Vadodara, and Kutch-Gandhidham.

"We are committed to maintaining law and order, and people can call police in case of trouble. We will provide them security," Gujarat CM Vijay Rupani said Monday. (With agency inputs)