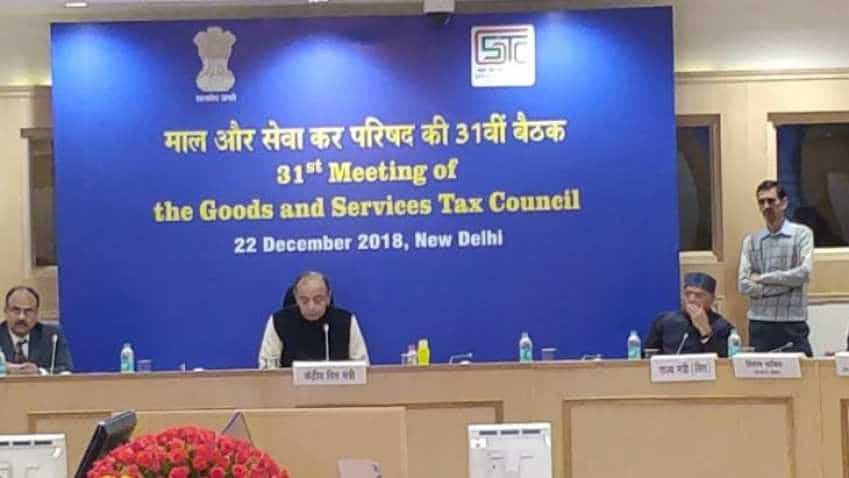 GST council meeting today: The Goods and Services Tax (GST) council met today for the 31st time. The meeting was chaired by Finance Minister, Arun Jaitley, which also include dother members of the council. Coming out of the meeting, V Narayanasamy, Puducherry Chief Minister was quoted as saying by news agency ANI today, "33 items have come down from 18% to 12% and 5% as they are common man’s consumption goods." "The original demand by Congress that all goods should come down to 18% & below except luxury items has been agreed by the Government. Except 34 items all other will come down to 18% & below."  READ | Full list of item with new GST slab

- GST rate on third party insurance premium of goods carrying vehicles shall be reduced from 18% to 12%," said an official statement.

"The GST Council in its 31st meeting held today at New Delhi gave in principle approval to the following amendments in the GST Acts:

Amendment of section 50 of the CGST Act to provide that interest should be charged only on the net tax liability of the taxpayer, after taking into account the admissible input tax credit, i.e. interest would be leviable only on the amount payable through the electronic cash ledger.

The above recommendations of the Council will be made effective only after the necessary amendments in the GST Acts are carried out."

"The GST Council in its 31st meeting held today at New Delhi decided to refer the following issues to Committees / GoM indicated against them:

- Jaitley said that the 31st GST Council meeting has approved proposal to form a 7-Member Group of Ministers to study the revenue trend, including analysing the reasons for structural patterns affecting the revenue collection in some of the states. The study would include the underlying reasons for deviation from the revenue collection targets vis a vis original assumptions discussed during the design of GST system, its implementation and related structural issues.

- Finance minister Arun Jaitley said that today's GST rate reduction will have an overall impact on revenue of Rs 5500 crore.

- Next GST councing meeting to take place in January.

- Jaitley: GST rate on cement: No change. Jaitley said there was no discussion on CST rate for cement in the council team. GST rates have been reduced on 32-inch TV. Jaitley said, a reduction in GST rates on Cement would cost Rs 13,000 crore.

- Jaitley: A committee to be formed to look into revenue loss of states. No discussion on the reduction of GST rates on cement

- Jaitley: GST collection lower than expectations. Most of the goods used by the common man now below 28 per cent slab except cement and automobile goods

- According to a BTVI report, Congress ruled states opposed pruning of 28% rate slab at the GST council meeting. Officials from MP, Rajasthan, Chhattisgarh oppose major rate cut. Officials from the Congress-ruled states told the Council that their leadership saw rate cuts as a political move ahead of the General Elections.

- The GST on Auto parts has been reduced from 28% to 18%, according to Zee Business TV report.

It was earlier expected that commodities such as cement, computer screens, power banks, UPS, tyres, digital cameras, washing machines and water heaters are likely to become more pocket-friendly. Currently, these products are under the 28% tax slab and it is an expectation that they might come under the 18% slab.

Initially, when GST had just been imposed, on July 1, 2017, there were 226 goods in the 28 per cent slab. In the meeting held in July, the GST council had further pruned the 28 per cent slab, as it cut rates on paints and varnishes, and on daily-use items like perfumes, cosmetics, toiletries, hair dryers, shavers, mixer grinder, vacuum cleaners, lithium-ion batteries, and cut rates to 18 per cent. Jaitley, in a blog post, had said the 28% category is being phased out and the bracket currently covers the most luxurious items, the ones you don't require daily.

He also said that the tax on other sinful items such as cement, air-conditioners, large screen televisions and a handful of others could also be reduced as revenues rise. “Thus within a record period of thirteen months, the GST Council has almost phased out the 28% category.

It is only a matter of time that the final obituary of the ‘Congress Legacy Tax’ is written. Only the luxury-sin tax would remain,” Jaitley said in a Facebook post. The former year has observed a rate reduction in 384 commodities and hasn't increased, even once.