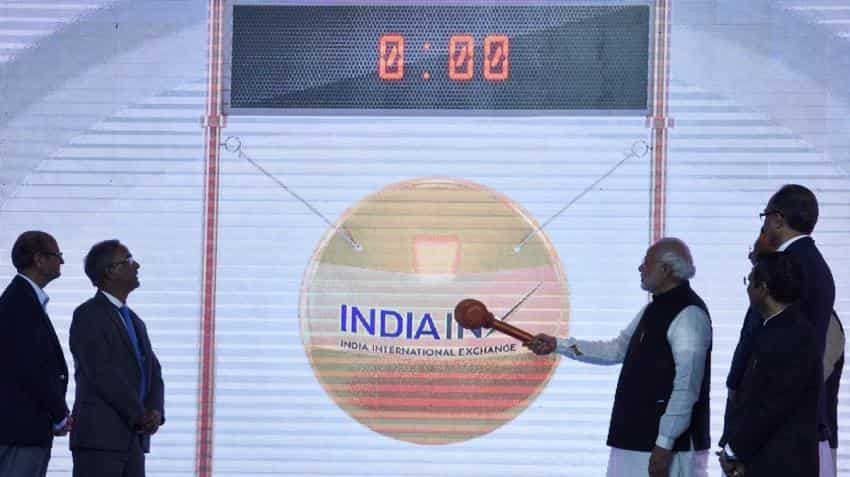 According to the Bloomberg report, Modi said that the exchange will have masala bonds for trading and will operate from Japan's markets opening time to US markets closing time. Image Source: Official Twitter Handle
Written By: ZeeBiz WebTeam
RELATED NEWS

According to the Bloomberg report, Modi said that the exchange will have masala bonds for trading and will operate from Japan's markets opening time to US markets closing time.

According to the offficial Twitter handle of Prime Minister Office of India (PMO India), the exchange will be the country's first international stock exchange.

"...Today I am delighted to be here to inaugurate the new India International Exchange. It is an important milestone not just for GIFT city but for India, in creating 21st century infrastructure," PMO India Twitter handle said citing Modi, as saying.

"This exchange is set to be among the fastest exchanges in the world with most modern trading, clearing and settlement systems. India is in an excellent time-zone between West and East. It can provide financial services  through the day and night to the entire world," Modi said on Twitter.

"The exchange I am told will work twenty two hours a day, starting when the Japanese markets start, and closing when US markets close. I am sure, this exchange will set new standards for quality of service and speed of transactions across time zones," he added.

The exchange will provide onshore talent with offshore technological and regulatory framework.

"... It aims to provide onshore talent with offshore technological and regulatory framework. This is to enable Indian firms to compete on an equal footing with offshore financial centres. GIFT City IFSC will be able to provide facilities and regulations comparable to any other leading international finance centres in the world." PMO India quoted Modi as saying on Twitter.

Combination of talent and technology....enabling Indian firms to compete on an equal footing with offshore financial centres. pic.twitter.com/ensTKBwang