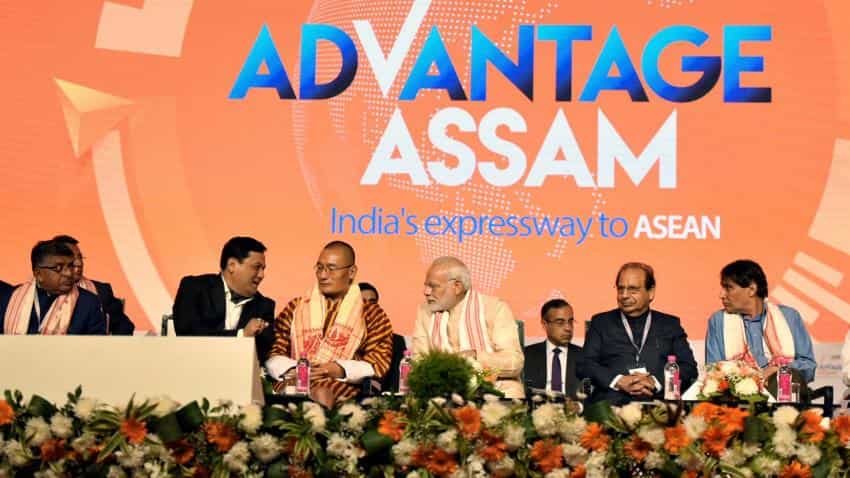 Prime Minister Narndra Modi emphasised that India's growth story would be further energised through balanced and fast-paced growth of the north-eastern region, while addressing the inaugural session of Advantage Assam - Global Investors Summit 2018, in Guwahati.

Welcoming delegates to the summit, the Prime Minister said that the north-east is at the heart of the government's Act East Policy. The policy envisions increased people-to-people contact, trade ties and other relations with ASEAN countries, he added.

The Prime Minister recalled the recent ASEAN India Commemorative Summit celebrating 25 years of partnership between ASEAN and India. He added that ties between India and the ASEAN countries go back thousands of years.

He said it was a privilege for India to host heads of 10 ASEAN countries as honoured guests at the Republic Day function in New Delhi.

He said all the schemes of the government are oriented towards bringing about a qualitative change in the lives of the people. He said the aim is to improve "Ease of Living."

The Prime Minister said that the "Ayushman Bharat" scheme announced in the Union Budget is the largest scheme of its kind in the world. He said this health care scheme would benefit about 45 to 50 crore people. He also mentioned other steps for health care for the poor, that have been taken by the government.

Narendra Modi said that the government was working towards the target of doubling farmers' incomes, by lowering input costs and enabling appropriate price for their produce. He outlined other steps being taken by the Union Government for the welfare of farmers.

The Prime Minister mentioned the steps taken to provide affordable housing to people. He spoke of the UjalaYojana for distribution of LED bulbs, which is resulting in significant savings on household electricity bills. He also mentioned the restructuring of the National Bamboo Mission, which he said, is especially significant for the north-east.

The Prime Minister said that a revamp of administrative structures within the government has greatly speeded up the implementation of projects.

The Prime Minister said the government has taken various steps for providing collateral-free loans to entrepreneurs, under the Mudra Yojana and steps taken to provide tax relief to MSMEs.

The Prime Minister reiterated the commitment of the government to curb corruption and black money.

He said the government has taken up many path breaking economic reforms in last three years, which have simplified procedures for doing business. It is a result of these reforms that India today ranks 100 among 190 countries in the Doing Business Report of the World Bank, after climbing up 42 ranks, he added.

Quoting the great Assamese musician Bhupen Hazarika, the Prime Minister said it is our collective responsibility to achieve the vision and dreams of our freedom fighters, and create a New India by 2022.

The Prime Minister outlined the work done to create new transportation infrastructure in the north-east.

He congratulated Assam Chief Minister SarbanandaSonowal for creating a business and development friendly environment in Assam.