Wielding sticks and clubs and holding the tricolour and union flags, tens of thousands of farmers atop tractors broke barriers, clashed with police and entered the city from various points to lay siege to the Red Fort and climb the flagpole on Republic Day on Tuesday. 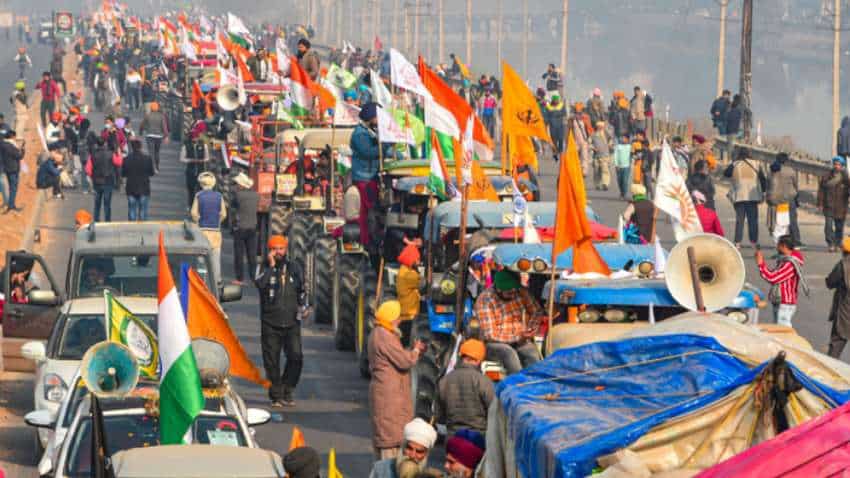 The protesters were later removed from the premises of the Red Fort. PTI photo.
Written By: PTI
RELATED NEWS

Wielding sticks and clubs and holding the tricolour and union flags, tens of thousands of farmers atop tractors broke barriers, clashed with police and entered the city from various points to lay siege to the Red Fort and climb the flagpole on Republic Day on Tuesday.

While farmer leaders, who have been spearheading the two-month protest at the national capital's border points to demand a repeal of the farm laws, disowned the protesters, one young man was seen hoisting a yellow triangular flag at the flagpole ? the centrepiece of the country's Independence Day celebrations.

The protesters were later removed from the premises of the Red Fort.

Eclipsing the annual show of military might at Rajpath, the farmers who were supposed to take out a tractor parade on pre-decided routes after the Republic Day event was over breached both conditions. Clashes and lathi-charges broke out in many places between a section of the protesters, many of them young, vocal and aggressive, and police personnel.

If police used teargas shells to disperse the restive crowds in some places, hundreds of farmers in ITO were seen chasing them with sticks and ramming their tractors into parked buses. A protester died after his tractor overturned.

ITO resembled a war zone with a car being vandalised by angry protesters and shells, bricks and stones littering the wide streets, testimony to the fact that the farmer movement that had been peaceful for two months was no longer so.

As the day progressed and thousands of farmers roamed restlessly, thousands more congregated at the Red Fort ? on foot, tractor and some even on horses -- about four kilometres from ITO.

In unprecedented scenes, protesters entered the complex of the Mughal era monument and attempted to climb the domes and the ramparts, some clambering up the flagpole to hoist a flag from the same place the prime minister unfurls the tricolour from on Independence Day.

Tension spiralled as the crowds swelled. Pushed back by the police from ITO, some protesting farmers drove their tractors to Red Fort complex. Uniformed security personnel could be seen looking on as people gathered in larger numbers.

Though there were no immediate reports of injuries, ambulances could be seen entering the Red Fort complex. There was a mild lathi-charge with police removing protesting farmers from the Red Fort.
The tension was mirrored elsewhere in the city too.

Police baton charged farmers at Chintamani Chowk in Shahdara when they broke barricades and smashed window panes of cars. A group of 'Nihangs' (traditional Sikh warriors) clashed with security personnel near Akshardham Temple. And at Nangloi Chowk in west Delhi and at Mukarba Chowk farmers broke cemented barricades and police used tear gas to disperse them.

As chaos reigned with flashpoints aplenty, farm union leaders distanced themselves from what was going on.

"We condemn violence against farmers, appeal to all to maintain peace," Balbir Singh Rajewal, one of the leaders, told PTI. He added that no one from the Sankyukt Kisan Morcha, an umbrella body of 41 unions, went to Outer Ring Road.

A member of the Sankyukt Kisan Morcha, an umbrella body of 41 unions, leading the protest against the three central farm laws at several border points of Delhi, said those who broke the barricades at Tikri border points belonged to the Kisan Mazdoor Sangharsh Committee.

He said the Sankyukt Kisan Morcha's tractor parade would start as scheduled after police give farmers way. The Kisan Mazdoor Sangharsh Committee on Monday announced that they would hold their march on Delhi's busy Outer Ring Road on Republic Day.

The day began on a celebratory note with farmers chanting 'rang de basanti' and 'jai jawan jai kisan' crossing the national border on tractors, motorbikes, horses and even cranes for their proposed parade.
Locals stood on both sides of the roads at various locations showering flower petals on the farmers amid drum beats.
Standing atop vehicles decked up with flags, protesters could be seen dancing to the tune of patriotic songs such as ?Aisa desh hai mera? and ?Sare jahan se achcha?.

But the mood changed soon after.

Delhi Police appealed to protesting farmers to not take law into their hands and maintain peace as the violence broke out.

The police also asked the farmers to head back to their pre-decided routes for the tractor parade.
Union Minister of Tourism and Culture Prahlad Patel condemned the actions of a section of farmers who entered the Red Fort as part of their tractor rally and said it violated the symbol of dignity of India's democracy.

"The Red Fort is a symbol of the dignity of our democracy. The farmers should have stayed away from it. I condemn the violation of this dignity. It is sad and unfortunate," Patel said in a tweet.

Congress leader Rahul Gandhi said violence is not the solution to any problem.

"If anyone gets hurt, the damage will be done to our country. Take back the anti-agricultural laws in national interest," he said in a tweet in Hindi.

Taking up cudgels on behalf of the farmers, the CPI(M) lashed out at the Centre over the treatment meted out to protesting farmers during their tractor rally, and said tear gassing and lathicharging them is "unacceptable".

The entry and exit gates of more than 10 metro stations in central and north Delhi were temporarily closed following the trouble.

Farmers, mostly from Punjab, Haryana and western Uttar Pradesh, have been camping at several Delhi border points, including Tikri, Singhu and Ghazipur, since November 28, demanding a complete repeal of three farm laws and a legal guarantee on minimum support price for their crops.