Known for his excellent oratory skills, PM Narendra Modi's razor-sharp sarcasm was on full display as he was replying to the Motion of Thanks on the President's address in the Rajya Sabha. 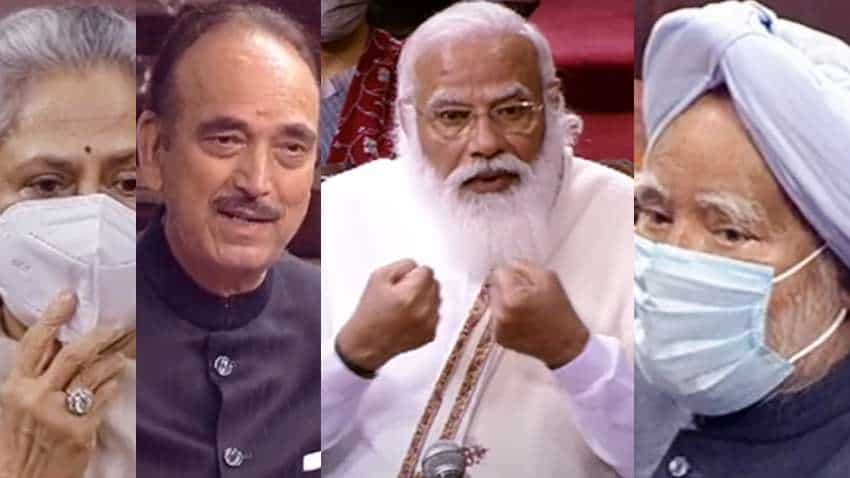 - MANMOHAN SINGH: He quoted former prime minister Manmohan Singh on the need for reforms in the farm sector and said the Congress should take pride that Modi had to do what the former prime minister wanted. Modi said since 2014 his government has initiated changes in the agriculture sector aimed at empowering farmers.

- Prime Minister Narendra Modi on Monday appealed to protesting farmers to end their agitation against the new farm laws even as he questioned opposition parties for their sudden "U-turn" on the agriculture sector reforms.

- MSP, MSP, MSP:  "On the farm sector and the ongoing protest, Modi said, "MSP was there. MSP is there. MSP will remain in the future. Affordable ration for the poor will continue. Mandis will be modernised," PM Modi said.

- ANDOLAN JEEVI: The prime minister also hit out at those behind the protests, saying a new "breed" of agitators called "andolan jeevi" has emerged in the country who cannot live without an agitation and the nation should guard against them.

- PROUD OF SIKHS: Modi also stressed that India is very proud of the contribution of Sikhs and the language used by some of them will not benefit the country. He alleged that some people are also trying to defame Sikhs. "This is a community that has done so much for the nation. The country takes pride in the contribution of Sikhs, but some people are trying to defame them. The words and blessings of the Guru Sahibs are precious. The language used by some for them will not benefit the country," he said while replying to the Motion of Thanks on the President's address in the Rajya Sabha.

WATCH FULL VIDEO: PM Narendra Modi's reply to the motion of thanks on the President's Address in the Rajya Sabha

- "I invite you to come forward and solve the problems of agriculture sector by making those protesting against the laws understand the reforms...Let's move forward together," he said.

- He said the agriculture minister has been holding constant dialogue with farmers and has held several meetings with them and there is no tension yet, as both sides are trying to understand each other.

- "We urge those sitting on the agitation that even though it is their right to agitate, the manner in which the old people are sitting there, is not right. They (agitators) should be taken back. They should end the agitation and we will together find a solution as all doors are open for dialogue. From this House, I again invite them for dialogue," he said while appealing to farmers to end their agitation.

- "We should move forward and not take the country behind. All the opposition and the government, protesters should give these reforms a chance and see if this change helps them. We are ready to remove shortcomings.

- "I assure you that Mandis will be modernised. Not just this, MSP was there, it is there and will remain. Cheap ration given to over 80 crore people will continue. Please do not try to spread misinformation. We also need to strengthen means to increase the incomes of farmers," he also said.

- The prime minister admitted that there were problems in the agriculture sector and said everyone together has to find a solution to them.

- "I feel time cannot wait. Every law requires reforms as we are not ones living in a static state. We should all move together with good reforms," he said.

- He noted that if "we delay the reforms further, while sticking to our political preferences, we will usher the farmers towards darkness and we have to worry about it".