Farmers protest in Delhi Today: There is no letup in intensity of farmers' protest even in its 8th day as they have almost laid siege to the national capital in protest over the new agriculture laws. 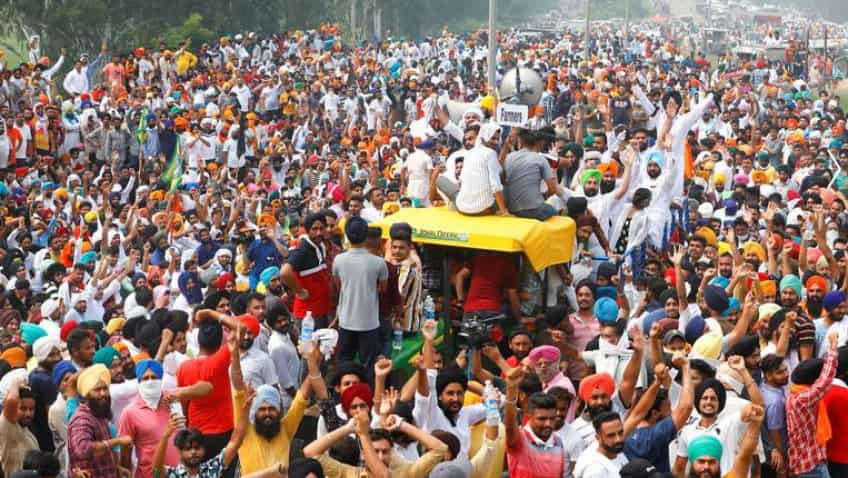 Farmers protest in Delhi Today: There is no letup in intensity of farmers' protest even in its 8th day. The farmers have almost laid siege to the national capital in protest over the new agriculture laws. As the agitation led by farmers of Punjab and Haryana enters its second week on Thursday, there is some progress made regarding dialogue. The Centre is set to hold a fourth round of talks with farmers to convince them to call off the protest. Ahead of the talks, the Delhi police have intensified security arrangements and suggested alternative routes to commuters entering or exiting the city.

As part of their ‘Delhi Chalo’ march, farmers have been staging protests at four busy border points of the national capital — Singhu, Noida, Ghazipur and Tikri — to press their demands for repealing the agri-marketing laws. The agitating farmers had on Wednesday demanded that the Centre convene a special session of Parliament and repeal the farm laws as they threatened to block other roads in Delhi and “take more steps”. Let's us understand why farmers are protesting and what are their demands.

* Rollback agriculture laws: Primary demand of the agitating farmers is to repeal new farm laws passed by the Parliament recently. The farmers feel that the laws will reduce their earnings, and make large retailers more powerful.

* Minimum support price (MSP): Another demand is to ensure minimum support price for their agriculture produce. They want a written assurance in the form of a bill that the MSP and conventional food grain procurement system for the central pool will continue in the future.

* Restoring Arhtiyas system: As government plans to do away with middlemen with new laws, protestors are apprehensive that the government might not buy their produce at guaranteed prices and hence disrupting their timely payments.

* Stubble burning punishment: They want government to do away with its new rule on stubble burning that is aimed at controlling air pollution. As per the new rule, those found burning stubble will be imprisoned for five years. Protestors also want those booked and jailed under this rule should be immediately released.

* Nullification of Electricity Bill Amendment: Farmers fear that new electricity amendment bill will stop subsidized electricity to them and they feel it supports privatization of electricity.
The Farmer's Produce Trade and Commerce (Promotion and Facilitation) Bill, 2020 and the Farmers (Empowerment and Protection) Agreement of Price Assurance and Farm Services Bill, 2020, were passed by the Upper House in September through voice vote despite objection from opposition parties.