Eicher Motors shares drop by Rs 360 - Is it due to Jawa vs Royal Enfield battle?

Eicher Motors has been witnessing selling pressure heavily since March 12. In fact, from that day till Monday, the shares have dropped by over Rs 1,800. 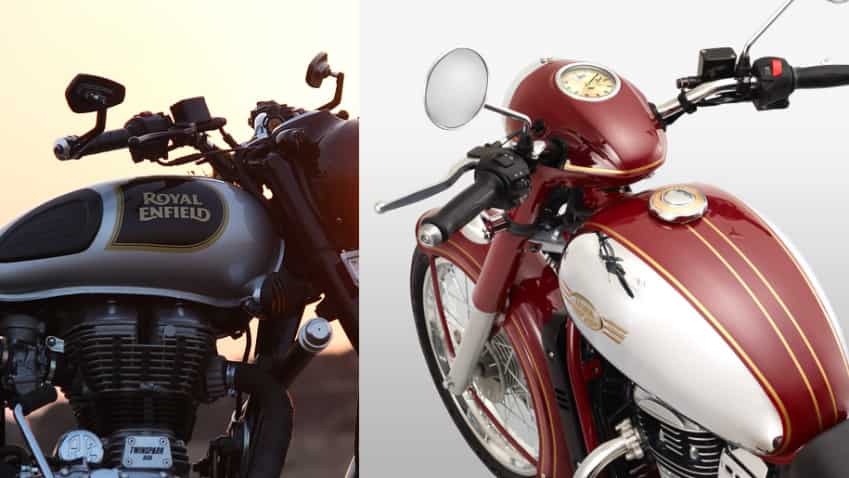 There seems no rest in Eicher Motors share price, as investors continue to sell their holdings. Monday’s trading session was no different. The Royal Enfield maker’s share price has plunged by over Rs 360 in one day, however, it was trading at Rs 21,202 below Rs 243.20 or 1.13% on Sensex at around 1523 hours. What is even more interesting to know is that Eicher Motors has been witnessing selling pressure heavily since March 12. In fact, from that day till Monday, the shares have dropped by over Rs 1,800. Not only even, but analysts have also given sell rating on Eicher. Thereby, if you are holding this stock, here’s what you should know.

Raghunandhan N L and Mumuksh Mandlesha analysts at Emkay said, “Royal Enfield volumes suffered a 10% yoy decline over Nov’18-Feb’19 despite the absence of negative one-off factors such as production losses due to labor strikes. Volume performance is expected to remain subdued due to the steep but inevitable price increases influenced by external factors as well as the emergence of strong competition, as per our channel checks.”

The duo added, “Competitive intensity has increased in the cruiser motorcycles segment after the entry of Jawa Motorcycles, which has provided an alternative to RE's unique brand positioning and offerings. Jawa has witnessed strong order bookings, and its existing production capacity is fully booked until Sep'19.”

On the other hand, Aditya Makharia  and Abhishek Jain analysts at HDFC Securities said, “Multiple factors are likely to impact the growth outlook at Eicher. After witnessing robust growth over CY12-FY18, when earnings grew at 46% CAGR, we believe earnings growth will moderate to 10% CAGR over FY19-21E as lifestyle segment growth normalizes in India, competition steps in and export initiatives take time to pay off.”

The duo at HDFC Securities also accepted that, Jawa motorcycles have merged as first serious competitors of Royal Enfield. They added, “The Jawa is the first serious competitor to the RE range of bikes as the brand has a rich legacy in India, similar to that of Royal Enfield. They have launched twin products i.e. the Jawa and the Jawa forty two. The bikes have received an encouraging consumer response, with c.50,000 bookings.”

Where is the Eicher stock headed?

Looks like the days and demand of Royal Enfield are going down ahead. While Jawa motorcycles have become an alternative of RE, this has led to lackluster demand for Eicher Motors bike. Hence, days are gone where Eicher was riding on the robust performance of RE. Thereby, investors embrace for an impact, because Eicher seems to be a not money making stock.