Don't have Aadhaar card? ICICI Bank can help you in getting one; here is how

ICICI Bank has come with an helping hand to residents who do not have an Aadhaar card. This is specifically for citizens residing in National Capital Region (NCR). 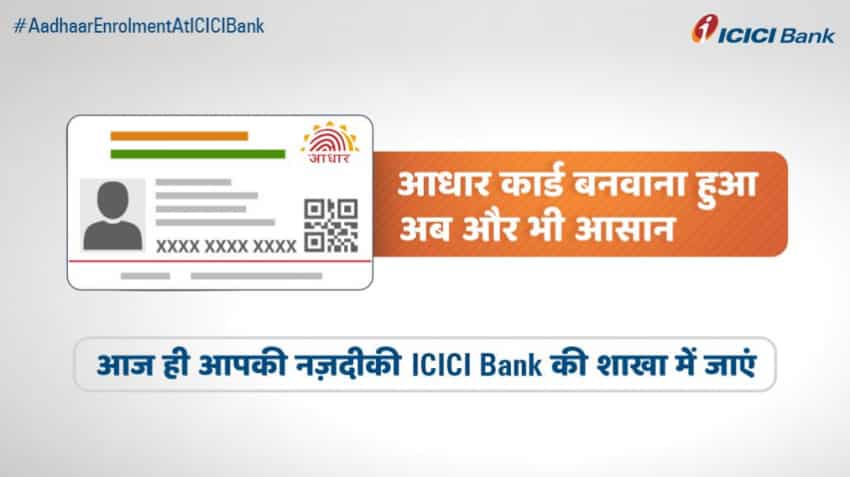 Aadhaar card, issued by UIDAI, has become a vital identity. Any individual is allowed to have their own Aadhaar card. Its uniqueness, authentication, financial address and e-KYC, have enabled government to reach out to residents across India and deliver various subsidies, benefits and services.  Also, Aadhaar helps in many services like applying for PAN card, filing for ITR, bank account opening and investments. Now, the private lender ICICI Bank has come up with an helping hand to residents who do not have an Aadhaar card. This is specifically for citizens residing in National Capital Region (NCR). People here without Aadhaar, can apply for new one by just visiting at ICICI Bank’s nearest branches.

According to UIDAI, Even if someone in a family does not have individual valid documents, the resident can still enrol if his/her name exists in family entitlement document. In this case the Head of Family in entitlement document needs to be enrolled first with valid PoI & PoA document.

The head of the Family can then introduce other members in the family while they are enrolling. UIDAI accepts many document types as Proof of Relationship.

Acting as enrolment centre at ICICI Bank,  fill your personal details within the Enrolment Form. Your photo, finger-prints and iris scan will also be taken as a part of the enrolment.

If there is any correction in the enrolment data can be done within 96 hours of enrolment by visiting the enrolment centre with the acknowledgement slip.

What is Blue Aadhaar Card? Check details, how to apply and more