Subramanian, currently teaching at Harvard Kennedy School, and here for the launch of his book "Of Counsel: The Challenges of the Modi-Jaitley Economy", published by Penguin, referred to the chapter "The Two Puzzles of Demonetisation -- Political and Economic". 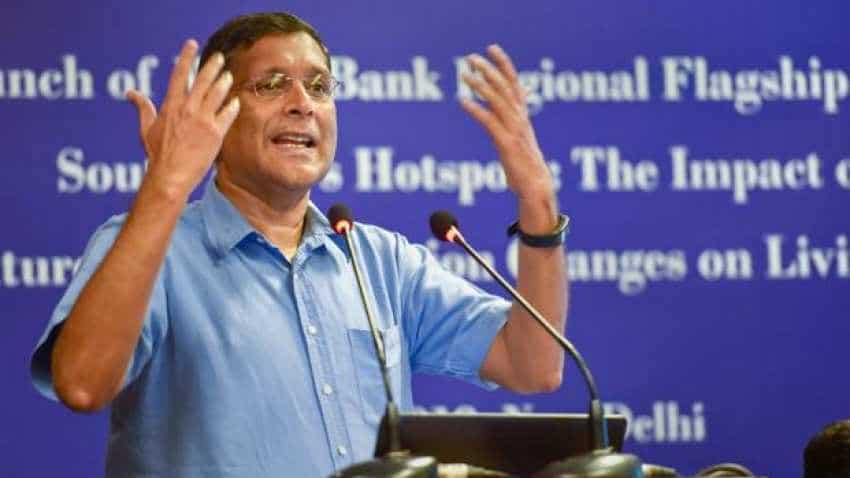 How can India grow faster? CEA Arvind Subramanian has to say this

Drawing the link between demonetisation and GDP numbers, former Chief Economic Advisor Arvind Subramanian has said the puzzle thrown up by the note ban has a dual aspect - whether its impact as seen in the GDP numbers reflects a resilient economy, and if the growth figures pose questions about the official data collection process itself.

In an interation with IANS, Subramanian, currently teaching at Harvard Kennedy School, and here for the launch of his book "Of Counsel: The Challenges of the Modi-Jaitley Economy", published by Penguin, referred to the chapter "The Two Puzzles of Demonetisation -- Political and Economic".

He also referred to the other "puzzle" posed in his book -- that of divergence in regional economic development in India despite equalising forces like migration and economic growth -- a dynamic of the states, he says, which runs against the logic of competitive federalism.

"Through my new book, I am drawing attention to the puzzle, the big puzzle of 86 per cent reduction in cash after demonetisation, and yet the impact on the economy was much less," he said.

"The puzzles essentially spring from the fact of why the measure was politically successful, and why GDP was affected in such smaller measure... Is it because we`re not measuring GDP correctly, not measuring the informal sector, or is it the underlying resilience in the economy?" he said.

"In the six quarters before demonetisation, growth averaged 8 per cent and in the seven quarters after, it averaged about 6.8 per cent (with a four-quarter window, the relevant numbers are 8.1 per cent before and 6.2 per cent after)," Subramanian has written in his book.

"The key to this would lie in a comprehensive understanding of both the polity and economy of India, about how people vote, for instance," he said.

He referred to the ongoing controversy on the NITI Aayog`s presence at the release of the GDP back series data by the Central Statistics Office (CSO) with a change of the base year, lowering the country`s economic growth rate during the previous UPA rule.

"I think the calculation of GDP is a very technical task and technical experts should do the job...institutions that don`t have technical expertise should not be involved in this," he said.

"Economists would naturally raise questions when the parameters vary so much and yet growth remains similar. It is not so much about credibility of the data as about the data generating process itself and of the institutions that carry it out," he added.

To a query on whether he was a participant in the decision-making process on demonetisation, the former CEA said: "As I`ve said in the book, it is not a Kiss and Tell memoir...that is for gossip columnists."

Asked about the recent tiff between the government and the Reserve Bank of India (RBI), Subramanian said the autonomy of RBI must be protected because the country will benefit by having strong institutions.

"I have myself advocated that RBI should play a pro-active role, but its surplus funds should not go towards routine financing of spending and deficit financing -- that would amount to raiding the RBI," he said

The government`s differences with the RBI centres on four issues -- the former wants liquidity support to head off any credit freeze risk, a relaxation in capital requirements for lenders, relaxing the Prompt Corrective Action rules for banks struggling with accumulated NPAs, or bad loans, and support for micro, small and medium enterprises.

Central to the liquidity issue was the government`s demand that the RBI hand over its surplus reserves by making changes to the "economic capital framework".

On the RBI board, which has a majority of government nominees, the former CEO said: "I think that part of maintaining a real autonomy is not to politicise the board. The board should not be politicised. Not only it must not be done, it must not be seen to be done either."

On the other puzzle of domestic divergences in development, he said the reasons could be historical in the form of the unequal impact of British colonialism in different regions of the country.

How can India grow faster? CEA Arvind Subramanian has to say this