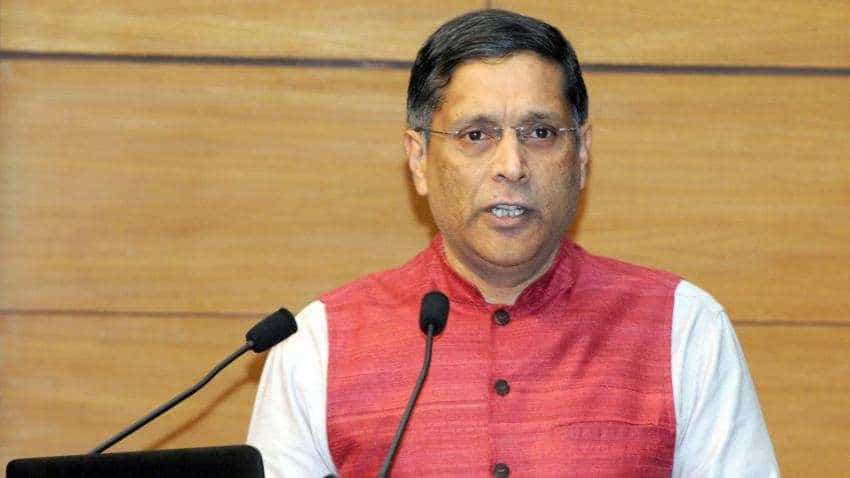 One of the major achievements of this government has been to have the IBC process: Arvind Subramanian. Image source: IANS
Written By: Anjul Tomar
RELATED NEWS

Outgoing chief economic advisor (CEA) Arvind Subramanian sees stigmatised capitalism as a big challenge for the Indian economy apart from agriculture and employment. Stigmatised capitalism has made it difficult for private sector to have a greater role in the economy, he tells Anjul Tomar in a conversation as he prepares to leave on July 26 for his next assignment. Subramanian will be going back to teaching and research at Harvard University’s Kennedy School of Government. Subramanian, 59, had joined the government in October 2014. His contractual term was coterminous with the government in May 2019.

After former Reserve Bank of India (RBI) governor Raghuram Rajan and former Niti Aayog’s chief Arvind Panagariya’s return to the academia, your decision to quit is being seen as the government’s failure to retain independent-minded economists. What do you say about it?
In my case, I am not leaving because the government is unhappy with me. I was supposed to leave last year. My contract ended last year. But they asked me to stay for another year and I stayed. I have my personal commitment.

What makes you happy when you look at your tenure as CEA? What has been your biggest contribution?
We were able to implement the revenue-neutral rate for Goods and Services Tax (GST), diagnose the twin balance-sheet problem, devise public investment strategy and bring out a world class Economic Survey. We also introduced lots of new ideas like universal basic income, JAM (Jan Dhan, Aadhar and Mobile) and stigmatised capitalism. Of course, I personally feel that we built a lot of capacity, especially around junior officers of Indian Economic Service. I had an extraordinarily close relationship with the Union minister Arun Jaitley and Prime Minister’s Office.

One decision of the government given a choice you would like to reverse today?
There are things which could have been done better and one or more things which should not have been done. It happens with all the governments. You regret some decisions. But beyond a point it is not for me as an economic advisor or a technocrat to second-guess the political decisions. Political bosses have to face the consequences and not me. I can give my advice and move on to teach at Harvard. So, my job is much easier that way.

There has been a lot of political pressure on RBI to reduce interest rates. But the central bank has been very cautious in its approach, some would say very conservative. What do you have to say?
Some 12-18 months ago, I asked for the RBI to cut interest rates. RBI had over-predicted inflation. At that time inflation was low, growth had decelerated, external conditions were very settled and private investments were still weak. So the economy needed the boost. But in the last 4-5 months, the situation has changed. The inflation is higher, the external environment is much more unsettled. Therefore, I fully support RBI’s recent actions.

Do you think GST rollout could have been better planned?
I think you should see the GST as a dynamic learning process. As long as we are learning constantly and rectifying as we go on, that is actually the best you could have asked for a complex reform like GST. Corrections have happened in a very timely fashion. There are still challenges ahead like exporter refund, more simplification, simpler forms, matching and all that is happening.

Are the GST rates too high?
I think there will be a scope for further paring down 28% tax slab. I do think the 28% rate is high. Once revenue stabilises as it seems to be happening.

What are the challenges before the economy?
In the medium term, agriculture is a big challenge. Farm incomes seem to be stressed irrespective of how monsoon and agriculture output is. We need to understand this and find ways of increasing farm incomes. Centre and states need to work together on it. We can have a direct benefit transfer or quasi universal income scheme. Telangana scheme can be adopted and modified. The other challenge, which is my contribution in terms of understanding the Indian economy, is what I call stigmatised capitalism. In India, the private sector has a kind of bad name to it. One consequence of it is that it becomes difficult to give the private sector a greater role in taking over existing public sector assets. So the whole privatisation whether in the airline sector or banking is proving to be very difficult. I think this is a very big challenge for our system. One consequence of that is that public sector bank managers are very reluctant to take decisions due to a notion that the decision will benefit a private company. You have public sector decision making becoming very cautious or paralysed as a result. The judiciary may get a greater role in key decision making.

The government brought in Insolvency and Bankruptcy Code (IBC). But recently, a kind of parallel process called project Sashakt was announced by the finance minister to tackle the problem of bad loans in the public sector banks. Do you think it can undermine the IBC process?
One of the major achievements of this government has been to have the IBC process. I myself was in favour of bad bank earlier. But because of the stigmatised capitalism it is more likely that a judicial process and framework would succeed rather than an executive and a political process which was the bad bank. IBC is a big achievement. It is the most important and most effective framework for twin balance-sheet banking problem, going forward. I think that is still the main game in town. We have to see, going forward, whether we have to adapt that or not. I have not studied the latest Asset Reconstruction Companies (ARCs) and Asset Management Companies (AMCs) in detail. But there are questions about how they will fit into IBC process, how it will be funded. These are the questions people are asking. They need to give answers.

We have been witnessing tariff war started by the US with China responding. India has contributed its mite by increasing tariffs on 29 goods. Do you support what India has done? How concerned are you about this?
I don’t think this is going to have a major impact. I think it is a clash between three major trading powers -US, China and European Union. We are kind of bystanders. We just have to prepare ourselves.