Minister of State for Finance Shiv Pratap Shukla said that the NDA government is working on Prime Minister Narendra Modi's vision of bringing India into the top 50 of ease of doing business ranking by 2022. 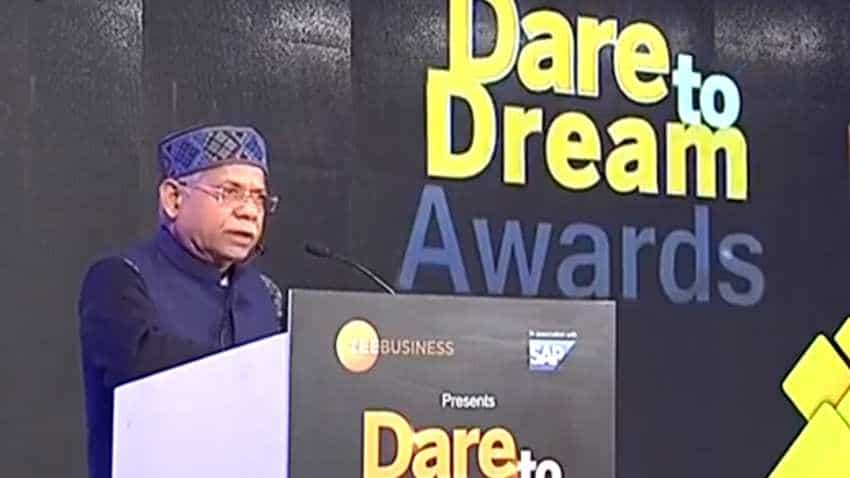 At Zee Business Dare to Dream Awards ceremony on Monday, Minister of State for Finance Shiv Pratap Shukla said that the NDA government is working on Prime Minister Narendra Modi's vision of bringing India into the top 50 of ease of doing business ranking by 2022. Speaking to Zee Business Online on the sidelines of the ceremony, Shukla said that the government will support all hard working and honest entrepreneurs to achieve their goals. "PM Narendra Modi always wants to help such entrepreneurs," he added. He said that today's entrepreneurs are role models for country's youth and if any business is facing an issue, it should come and discuss the problem with the government.

Earlier in November, PM Modi, while addressing a meeting on ease of doing business ranking with the Indian industry, had set the target of breaking into the top 50 list and said that efforts are on to nearly double the size of country's economy to USD 5 trillion. He had said that international bodies like the IMF, World Economic Forum and UNCTAD are recognising India's position because of the country's consistent reforms trajectory.

Praising the Mudra scheme launched by Prime Minister Narendra Modi on April 8, 2015, Shukla said that as many as 13 crore people have been benefitted by the scheme so far. He said that the scheme has helped more people to establish themselves as employers.

The scheme was launched by PM Modi in April 2015 with an aim to provide loans of up to Rs 10 lakh to non-corporate, non-farm small or micro-enterprises. The scheme aims to fund those businesses that aim to generate  income from a non-farm activity like manufacturing, processing, or trading but don't have enough capital to invest.

The dare to dream event was organised to celebrate the success of home-grown entrepreneurs and was also attended by Minister of State for Micro, Small and Medium Enterprises, Giriraj Singh.

Minister Singh urged the young entrepreneurs to empower themselves and set an example for everyone else. He said that for the first time in India, startups have been given a platform by PM Modi and added that the focus is on using technology to create employment in villages.