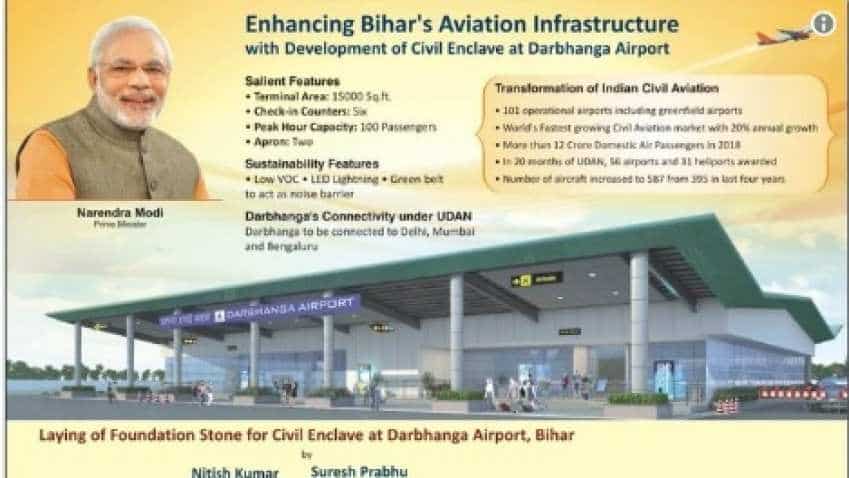 Flights under UDAN from the Darbhanga airport will connect to Delhi, Mumbai and Bengaluru. Image: Twitter
Written By: ZeeBiz WebTeam

Ministry of Defence has already granted its permission in October for construction of a temporary civil enclave at the airfield.

Below are the key features of the airport:

As far as the sustainability features are concerned, the airport terminal will have LED lights, a green belt to act as a noise barrier and low VOC.

Flights under UDAN from the Darbhanga airport will connect to Delhi, Mumbai and Bengaluru.

The UDAN scheme has given a much-needed boost to the regional connectivity. Since the launch of UDAN, as many as 56 airports and 31 helicopters had been awarded. The initial bidding for the routes under UDAN 3.0 has already been done and counter bidding is under process. Joint Secretary in Ministry of Civil Aviation Udha Padhee said that 111 initial proposals have already been placed for counter bidding under UDAN 3.0

The scheme has also contributed to keeping India world's fastest growing civil aviation market with an annual growth of 20 per cent. India, at present, has 101 operational airports. As per government data, India witnessed over 12 crore domestic passengers in 2018. The number of aircraft have also increased to 587 from 395 in the last four years.

The flight operations from Darbhanga airport is expected to start from July 2019.