Crude on boil: This is how vulnerable India is to oil price rise

Days are getting bleaker for India’s economy after the US President Donald Trump’s plan to to impose sanctions on Iran was revealed. It targets the energy sector from November 5th this year. 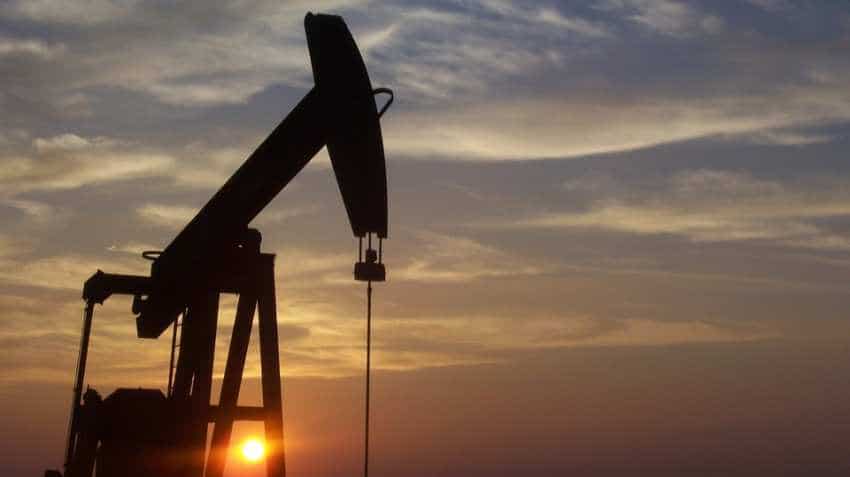 After laying low for almost three years, international crude oil price has taken center stage now, threatening India's macroeconomic stability. Brent crude has neared $80 per barrel mark, while US WTI futures are trending near 72-mark. Noteworthy, India is highly vulnerable to crude oil, as it is the third largest importer of crude in the world. Almost 80% of its total consumption depends upon oil imports. Thereby, making it difficult to breath, so to speak, when crude oil is consistently boiling. Not only this, days are getting bleaker for India’s economy after the US President Donald Trump’s plan to to impose sanctions on Iran was revealed. It targets the energy sector from November 5th this year.

For the first five months, the net oil deficit in this fiscal year is already at $39 billion and comprises a large chunk of the $82 billion trade deficit witnessed so far. 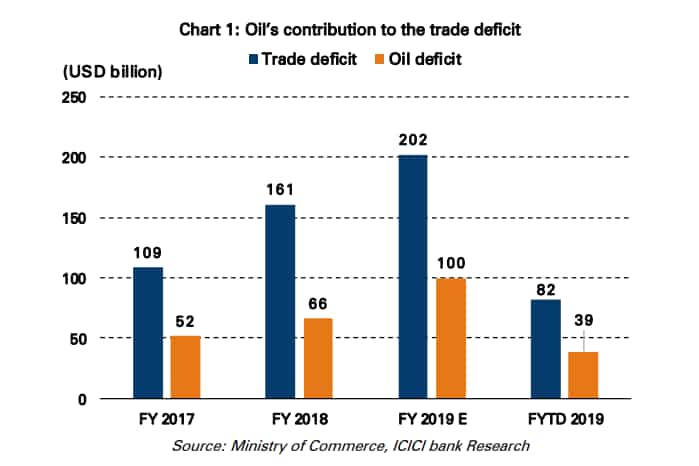 Coming to the latest headline Washington-Tehran feud, India will have to partially substitute its crude imports from Iran.

In ICICI Bank’s view,  in the previous round of sanctions in 2012, India had managed to placate the US by eliminating only 30% of its Iran imports, however, we believe the US will resort to a stricter stance this time.

Currently, India broadly imports four different grades of crude from Iran. Majority of these  imports are primarily heavy grade of crude, with the Iran Heavy, Foroozan and Soroosh grades comprising almost 70% of the total imports from Iran.

Generally,  a lighter and sweeter crude are easier and cheaper for refineries to use and as such, they are priced at a premium to the heavier and sour grades of crude.

Therefore, almost 70% of India’s crude imports is met by Middle-Eastern countries because of  availability, quality and feasibility of their oil. According to Indian refineries, Saudi Arabia, Iraq and Kuwait are the best alternatives to replace Iranian crude.

However, ICICI Bank mentions that, the prices offered by different countries (for various grades of crude) as per their monthly OSP’s and the quality of crude differentiated on the basis of their API gravity and Sulphur content, it is seen that Iran crude is the most favourable to Asian customers when compared to their other middle eastern rivals.

From the above it is quite clear, that Iranian crude is much favourable to India in terms of its cost and quality. It has been revealed that to entice customers and circumvent the impact of US sanctions, Iran has been offering its crude to India on a CIF basis (where the cost, insurance and freight charges are covered by the seller) as opposed to a free on board basis (where the buyer bears the cost of shipping and insurance).

Furthermore, Iran also gives a higher import credit of 90 days compared to around 30 days by other countries, which would mean India would have to replace the same amount of crude from the spot market unless filled in by other countries. 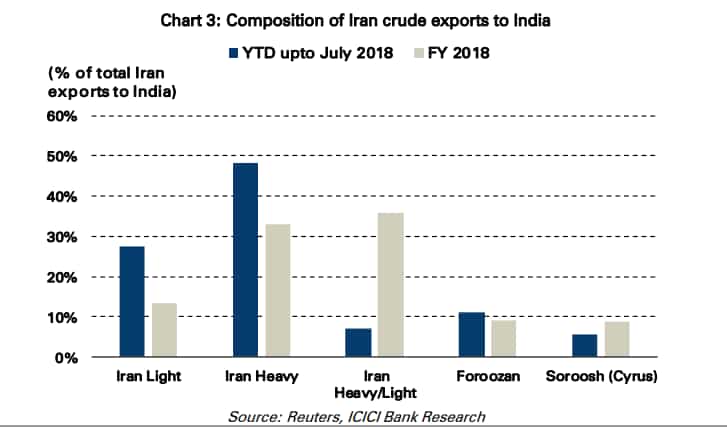 ICICI Bank adds, based on the average cost per barrel to India from different countries in the fiscal year 2018 and assuming a substitute (of the 300-350 kbpd expected) in the same proportion of crude exported to India from Iraq, Saudi Arabia and Kuwait, it expects an additional cost of USD 7 million per month and USD 84 million for the entire year to be borne by India.

Following the above, ICICI Bank said, "When looked at from India’s macro-economic view point, the “increased cost” from substituting Iranian crude is rather limited and even in a scenario of complete substitution, the increased cost adds to only 1% to the total oil deficit. However, in this scenario the dynamics of international crude price would be a lot different given India’s role as a major consumer of Iran crude.

It added, "Even if exporters continued to provide oil at competitive OSPs’, the benchmark prices would be much higher and India’s trade account would be under a lot more strain than is already expected."