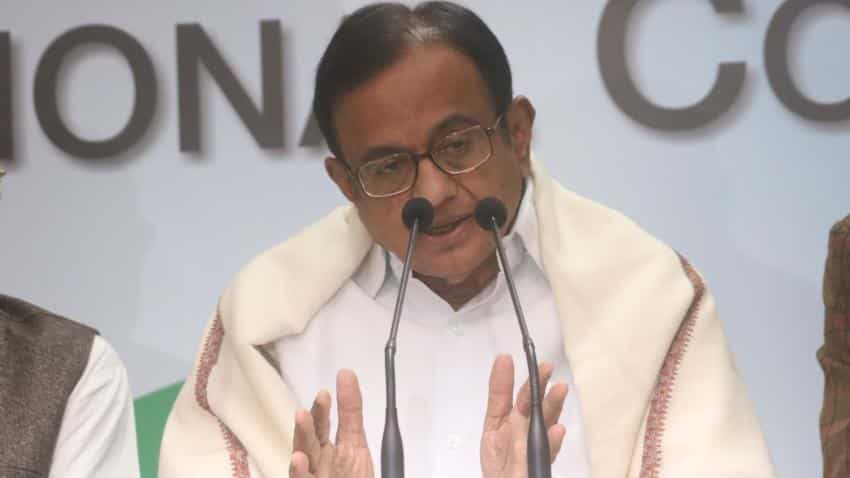 A icking holes with the latest Economic Survey tabled in Parliament, former Finance Minister P. Chidambaram said on Tuesday said that the Narendra Modi government`s claim to be able to create 75 lakh jobs by March is "outrageous" as it is "simply not possible" in India`s context.

"Take this new theory that we will create 75 lakh jobs by March in this country. I mean, you are exposed.

"Let`s look at the numbers. In 2014-15, the EPFO (Employees Provident Fund Organisation) numbers jumped by 23 lakh. It was when economy grew by 7.5 per cent.

"In 2015-16, EPFO numbers jumped by 25 lakh as the economy grew at 8 per cent. In 2016-17, it is expected to jump by 75 lakh. How can it jump by 75 lakh?" Chidambaram said during a panel discussion here at the release of his latest book "Speaking Truth to Power", a collection of articles he wrote over the months in a leading English daily on economy, politics and various social issues.

"China`s GDP is five times India`s and it creates 150 lakh jobs. The argument is India`s non-farm payroll jobs contributed to 75 lakh jobs? Which means farm sector and informal sector, there would be another 75 lakh jobs, or we would be creating 150 lakh jobs?" the former Finance Minister demanded to know.

"The attempt to use payroll as a measure was a good one but to use it to extrapolate and make such outrageous claims that India`s economy created 75 lakh jobs, hark. We can only measure non-farm employment or what we call payroll jobs with fixed salary, wages etc. You can extrapolate from what you can measure and then extrapolate it over the entire economy," he explained.

He said that jobs are the number one concern today.

"If we are creating 75 lakhs jobs, how come this is number one concern? It is the concern that led Hardik Patel, Jignesh Mewani and Alpesh Thakore to be able to mobilise their supporters (in Gujarat).

"You may dismiss it as caste mobilisation. Yes, caste is a convenient term to mobilise but the real driving force behind they mobilisation was jobs," Chidambaram said.

The Congress leader also termed the `one nation, one election` or the pitch for simultaneous elections by Prime Minister Modi as a "jumla", saying simultaneous polls are not possible with the present Constitutional arrangement.

"The Constitution of India does not give fixed term to any government. Unless we amend the Constitution, simultaneous elections are not possible. May be you can artificially construct an appearance of simultaneous polls by preponing some, postponing some (assembly polls) but you can do it for five or six states along with Parliament elections. But how can you do it with 30 states?