K. Srinath Reddy, President, Public Health Foundation of India (PHFI), talks about COVID-19, community transfer of the pandemic and efforts that should be made to fight with it, public health care infrastructure in India and need to strengthen them among others during an interview with Swati Khandelwal, Zee Business. Edited Excerpts: 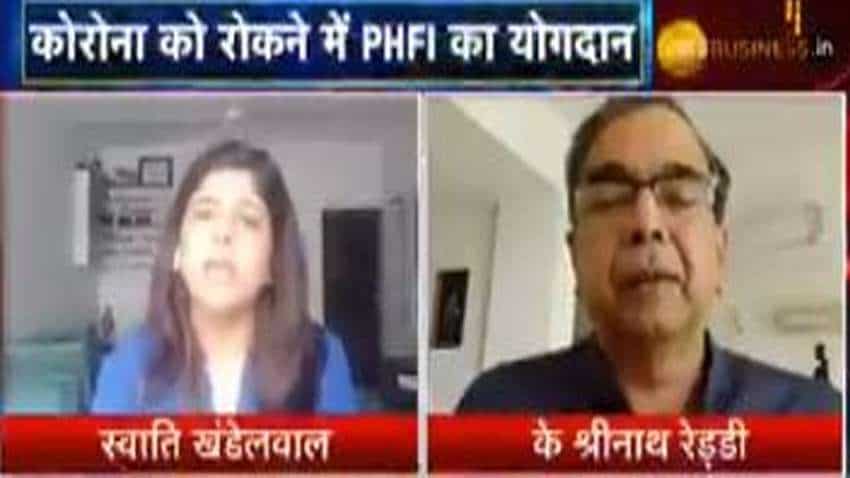 How important it is to invest in health infrastructure and public health in India?
Written By: Jitesh Kumar Jha
RELATED NEWS

K. Srinath Reddy, President, Public Health Foundation of India (PHFI), talks about COVID-19, community transfer of the pandemic and efforts that should be made to fight with it, public health care infrastructure in India and need to strengthen them among others during an interview with Swati Khandelwal, Zee Business. Edited Excerpts:

Q: Do you think that the cases of COVID-19 have reached its peak, if not, then how long will we have to see an increase in these cases, which is growing at a continuous pace?

A: As far as the peak is concerned then you will have to look at two figures

1 The number of cases.
2 The number of deaths and the speed at which it is going up.
The cases will increase because the number of tests has been increased, which means the numbers will go up. But, we will have to see the pace at which it is increasing and what is its effect on deaths. Even if there is an increase in the cases but the number of death remains very low as compared to other countries then we should believe that the pandemic has not proved itself deadly in our country as compared to other countries like Europe and America. So, we must not be quite worried about the growing cases, however, we must try to stop its spread and should pay attention to containment and increase the speed of contact tracing along with the tests. But we should assume that the pandemic is not very malignant till the number of deaths doesn’t go up at a high speed and it must not increase. This means that we have been able to have control on it to a certain level.

Q: Delhi and Mumbai are hotspots of COVID-19 pandemic. Do you think that there is a fear of community transfer because there is a rise in the number of active cases?

A: Community transmission can have different definitions. You mentioned Mumbai and Delhi about it. To an extent, we have seen that it is increasing in big cities and has a relation with international airports and travellers who are returning after a foreign trip. The virus has entered India through them and has spread through their contacts. So, it is natural that cities with big international airports and heavy traffic of travellers who are returning after a foreign trip are under danger of the spread of the pandemic and it is visible.

If you have a look at Eastern India, except Kolkata, then you will find that the pandemic doesn’t have a large impact in the region. This has happened as international travellers have not returned in the zone in much quantity. So, the pandemic has been transmitted through them in these cities and has spread quite widely into their contacts and their secondary and tertiary contacts. So, we should consider that it is not spreading across India through community transfer. But extensive cases are coming out at places where the pandemic is centralized at present and it should be controlled, it is essential. At the same time, we must have a look at a fact that countries with widespread of the pandemic have witnessed community transmission of the disease at some stage.

So, considering the danger of its spread we should take steps to have a control on it. For instance, we have to face a security check at the airports even when we are not aware that a terrorist is present at the airport or not. Similarly, we should consider that community transmission is there and take needed steps accordingly across the country.

Q: How important it is to invest in health infrastructure and public health in India?

A: Since many years, we have been saying that the public health sector hasn’t been encouraged in the way it should have been done. Our health facilities would have been strengthened but it never happened. These weaknesses are visible at present.

When it comes to public financing, the government's expenditure on health stands at just 1.2% in our country. And if it is compared with other countries then India stands among the last 10 countries in the list, i.e. 176th among 191 countries.

In the case of out-of-pocket expenditure, which stands at 62%, India stands among the top 10 countries on the list. This out-of-pocket expenditure often buries people below the poverty line. And, its danger is visible in our country as 60% of people fall below the poverty line due to out-of-pocket expenditure. It has an impact on primary health services as well as big hospitals. District hospitals were neither developed properly nor proper steps were taken to strengthen them, this is why the weaknesses are visible now. Although health facilities are good in some states, while it is poor in others. When looked with a national perspective than there is a need to spend more on health and it should be spent mostly on the primary health services as most health care facilities are provided at these centres. So, there is a need to strengthen the primary health facilities and district hospitals. At the same time, there is a need to encourage medical colleges and hospitals as there is a shortage of doctors and nurses in India but the numbers must go up. Thus, we should pay attention to all these factors otherwise we are scared of this disease but will get nervous if some other diseases break out. Secondly, we are paying more attention to COVID-19 and it is good. But the problem is that we are not concerned about other issues related to health like maternal and child, non-communicable diseases, mental health and chemotherapy because we are struggling with COVID-19. But, it would have not occurred if we had a good and improved health facility in India. In such a condition, we would have dealt with every ailment with the same efficiency.