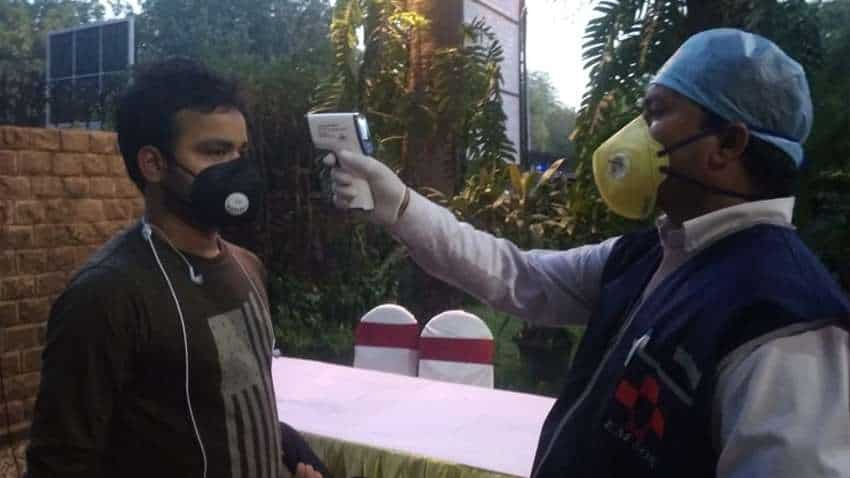 The Delhi government was among the first to ban all conferences, seminars and sports events, including the IPL. Source - IANS.
Written By: Manas Tiwari
Edited By: Harish Dugh
RELATED NEWS

The Delhi government was among the first to ban all conferences, seminars and sports events, including the IPL. There will be no gathering of over 200 people in the national capital, Delhi Deputy Chief Minister Manish Sisodia said on Friday. All schools, colleges and cinema halls have also been shut in the state till March 31.

"The government has banned all the conference, sports events and seminars. All the big events, gatherings, sports events will be banned in Delhi," Sisodia said. The Delhi Deputy CM said the district magistrates have been instructed to ensure that all directives on coronavirus were implemented.

The Haryana government on Friday decided to close all colleges and universities in five districts located adjoining the national capital till March 31. All government and private schools in Sonepat, Rohtak, Jhajjar, Faridabad and Gurugram districts, in the neighbourhood of Delhi, will be closed till March 31. The schools in other districts of the state will function as usual.

The state reported the first death due to coronavirus in India. All schools and colleges in Karnataka's Kalaburagi`s city have been shut for a week. "We have directed all schools and colleges in the city to shut classes for a week, but not put off exams, as a safety measure and prevent the students from being affected by Covid-19 symptoms," Kalaburagi deputy commissioner B Sharat said.

"We have also cancelled the `Sharana Basaveshwara jathra`, a religious fair, in which thousands of people participate by joining the chariot procession in which the deity of the 12th century Lingayat seer is taken across the city on Friday," the IAS officer said.

Chief Minister BS Yediyurappa has announced that all malls, cinema halls, pubs, wedding ceremonies and other large gatherings in the state have been banned for another one week.

All schools and colleges in Uttar Pradesh have been closed till March 22. State chief minister Yogi Adityanath said the government would review the decision on March 20 and then decide on the future course of action. He said that isolation wards have been setup in every district and laboratories were also being set up in BRD Medical College, Gorakhpur and BHU in Varanasi, apart from Lucknow.

He said that 4,100 doctors had been trained to deal with coronavirus patients. The Chief Minister said that people should avoid mass gatherings and frequently wash their hands.

After a meeting chaired by CM Nitish Kumar, Bihar government has announced that all schools, colleges, and coaching institutes will remain closed till March 31. Students of government schools will get the money for mid-day meal in their bank accounts till their schools are closed. It said that all government programmes related to Bihar Diwas, which was to be observed on March 22, have been cancelled.

"The pre-scheduled examinations being conducted by the state board and councils would not be affected in view of the closures of the schools. All 16 District Administrations and various Zonal Education Officers are directed to ensure strict compliance of the order by all concerned and authorities," the official said.

What PM Narendra Modi has suggested

Prime Minister Narendra Modi on Friday urged the SAARC nations to chalk out strategy to fight it and set an example to the world. In a series of tweets, Modi said, "Our planet is battling COVID-19. At various levels, governments and people are trying their best to combat it. South Asia, which is home to a significant number of the global population, should leave no stone unturned to ensure our people are healthy.

"I would like to propose that the leadership of the SAARC nations chalk out a strong strategy to fight coronavirus. We could discuss, via video conferencing, ways to keep our citizens healthy. Together, we can set an example to the world and contribute to a healthier planet," he said.