Coal India has witnessed very good results, CLSA has given a buy call extending target from 275 to 290. 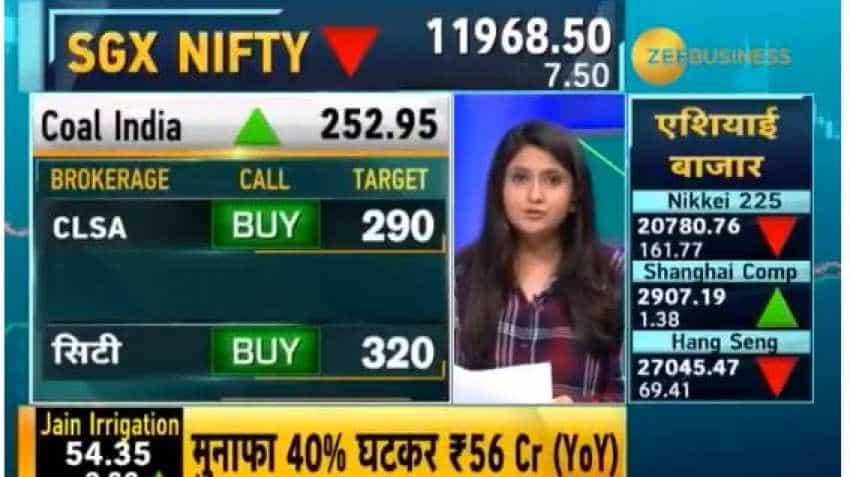 Talking about ONGC, the report said that CLSA has maintained buy call, raising target from 240 to 285. Image source: Zee Business/twitter

Boosted by optimism from a newly formed cabinet headed by Prime Minister Narendra Modi, who took oath of office on Thursday along with his ministers, the benchmark BSE Sensex reclaimed the 40,000 mark, rallying nearly 300 points in early trade, while the broader NSE Nifty also crossed the 12,000 level, and was trading 81.20 points, or 0.68 per cent, higher at 12,027.10. After hitting a high of 40,119.81, the 30-share index was trading 271.12 points, or 0.68 per cent, higher at 40,103.09. Amidst this optimistic scenario, Zee Business TV looked at call from brokerages on Coal India, ONGC and Glenmark.

According to the report, Citi and CLSA remained bullish on Coal India stock and raised its TP. Coal India has witnessed very good results, CLSA has given a buy call extending target from 275 to 290. Citi has also given a buy rating raising target to Rs 320 from Rs 300 per share. Citi said the company offers an attractive dividend yield.

Talking about ONGC, the report said that CLSA has maintained buy call, raising target from 240 to 285. As ONGC Q4 results confirm a subsidy exemption for FY19, this has attracted a very positive consideration for this PSU.

Macquarie, however, gave 'Outperform' call for ONGC with a target at Rs 210 per share. The key points of ONGC Q4 result include EBITDA-EPS significantly below consensus and estimates; the company did not bear any subsidies in Jan-March quarter; Q4FY19 crude realisation at $62 versus $67 in Q4FY18.

About Glenmark, the report said that CLSA has downgraded it to 'sell' from buy, with target cut to Rs 500 from Rs 740 per share. The company's Q4 below estimates due to a miss on US revenue and higher R&D spends. CLSA expects investment phase to remain high over the next two years as high investment phase will keep earnings outlook subdued. It also cut FY20-21 EPS estimates by 22-27 percent.

Macquarie has also reduced target for Glenmark, giving a Neutral call at 600 per share, the report added.