PM Narendra Modi tweeted how this mission will encourage youngsters  towards pursuing science, research and innovation. 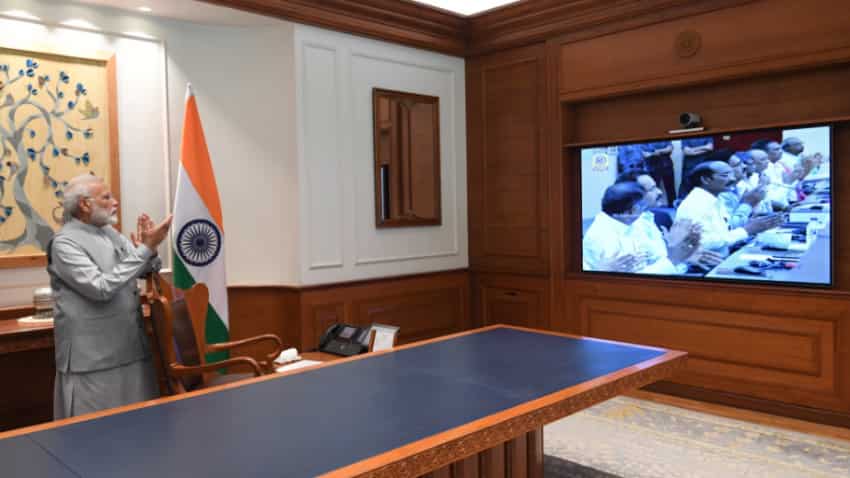 Prime Minister Narendra Modi applauded the Indian Space Research Organisation (ISRO) post the successful launch of  Chandrayaan 2, India's indigenous moon mission, on Monday. He further goes on to say that all Indians are immensely proud, along with his series of tweets saying how this mission will encourage youngsters towards pursuing science, research and innovation.

"Special moments that will be etched in the annals of our glorious history! The launch of #Chandrayaan2 illustrates the prowess of our scientists and the determination of 130 crore Indians to scale new frontiers of science. Every Indian is immensely proud today! Indian at heart, Indian in spirit! What would make every Indian overjoyed is the fact that #Chandrayaan2 is a fully indigenous mission. It will have an Orbiter for remote sensing the Moon and also a Lander-Rover module for analysis of lunar surface," he tweeted.
He further shared two photographs of himself watching the launch of Chandrayaan-2."#Chandrayaan2 is unique because it will explore and perform studies on the south pole region of lunar terrain which is not explored and sampled by any past mission. This mission will offer new knowledge about the Moon," the Prime Minister said."Efforts such as #Chandrayaan2 will further encourage our bright youngsters towards science, top quality research and innovation. Thanks to Chandrayaan, India's Lunar Programme will get a substantial boost. Our existing knowledge of the Moon will be significantly enhanced," he tweeted.

The Chandrayaan-2 took off from 2:43 pm from Dhawan Space Centre at Sriharikota in Nellore district of Andhra Pradesh making it the the fourth country after the Russia, US and China to make a soft landing on Moon. The spacecraft was scheduled to take of on July 14 2019, which was delayed by technical glitches detected by the researchers less than an hour before the launch. The launch rehearsal took place on Saturday, after which the launch was rescheduled on July 22 .

Spacecarft Chandrayaan-2 will explore the regions of Moon where no mission has set foot on. It comprises of an orbiter, a lander, and a rover together called a "composite body", with a mass on 3.8 tonne. Chnadrayaan-2 is expected to land on the south pole of the Moon by September 6 or 7 this year.