Breaking all conventions in an election year Interim Budget, Finance Minister Piyush Goyal on Friday showered tax sops for the middle class and salaried tax payers including by doubling the exemption limit to Rs 5 lakh. 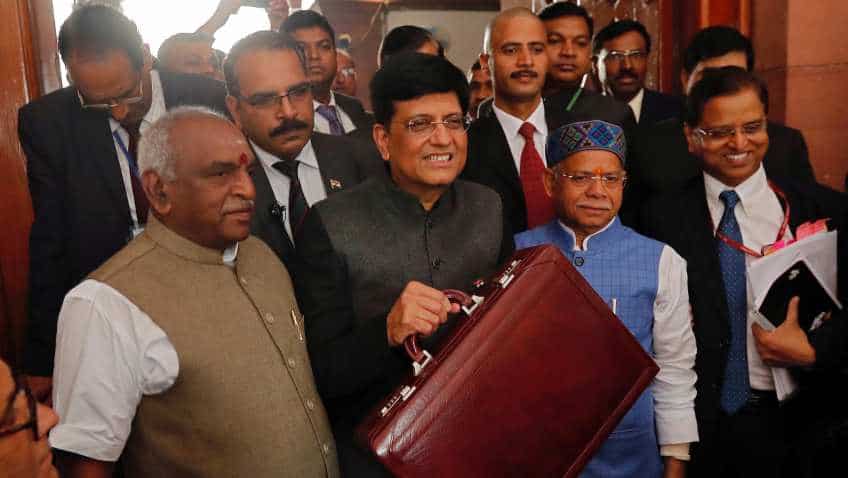 Breaking all conventions in an election year Interim Budget, Finance Minister Piyush Goyal on Friday showered tax sops for the middle class and salaried tax payers including by doubling the exemption limit to Rs 5 lakh and announced an annual income support of Rs 6,000 for small farmers and contributory pension for labourers in the demonetization-hit unorganized sector.

Taking the place of an ailing Arun Jaitley, in his 100-minute speech, Goyal also announced raising the Standard Deduction for the salaried class and pensioners from Rs 40,000 to Rs 50,000 and proposed exemption from tax on notional rent on second self-occupied home. This would help families maintaining homes at two locations due to their jobs.

In the wake of the BJP's defeat in the Hindi heartland states in December on perceived stress in agriculture and informal sectors, the Budget came out with a direct income support of Rs 6,000 per annum for small farmers with land-holding size up to two hectares which would be transferred directly into their bank accounts.

The scheme would be funded completely by the Central government and would directly benefit 12 crore farmer families, he said to the cheers of the ruling benches.

Acknowledging reduced returns for farmers due to falling food prices in the international market and declining inflation, Goyal said the scheme would be implemented from December 1 last year for which Rs 20,000 crore has been allocated in the revised estimates for the current fiscal and Rs 75,000 crore in the Interim Budget for the whole of next fiscal.

For the demo-hit unorganised sector, Goyal announced a contributory pension scheme providing for Rs 3,000 per month on attaining 60 year that will benefit 10 crore workers in the unorganized sector.

This scheme, he said, will be implemented from the current year and a sum of Rs 500 crore has been allocated and more will be given if needed.

"Once you account deductions under Section 80(C), middle class tax payers with gross income upto Rs 6.5 lakh will have no need to pay income tax," he said amidst prolonged thumping of desks by the ruling NDA members who kept shouting "Modi, Modi, Modi". The Prime Minister was himself seen thumping the desks every time Goyal made fresh announcements.

Taken along with Standard Deduction and other sops like interest paid on home loans, education loans, contribution to National Pension Scheme, medical insurance premium and medical expenses on senior citizens, the effective exemption would go up further.

He said while the changes in the tax structure would be made in the regular Budget, people needed a certainty in their minds in the beginning of the year about what taxes they would have to pay and went on to announce the tax sops in the Part B of his speech.

Goyal said raising the income tax exemption limit to Rs 5 lakh would alone give benefit of almost Rs 18,500 crore to middle class salaried tax payers, small traders and pensioners, while the increase in the standard deduction would give an additional benefit of Rs 4,700 crore.

The budget also stepped up defence allocation which he said will be crossing Rs 3 lakh crore for the first time in 2019-20. "If necessary, additional funds would be provided for securing our borders and to maintain preparedness of the highest order."

Part of the funding for the agriculture and unorganized sector schemes may come from the Rs 20,000 hike in the RBI and PSU dividends from Rs 54,000 crore in 2018-19.

Turning to macro finance in the budget, Goyal revised the fiscal deficit target for 2019-20 at 3.4 per cent of the GDP, up by 0.1 per cent targeted this year.

"We would have maintained fiscal deficit at 3.3 per cent for 2018-19 and taken further steps to consolidate fiscal deficit in 2019-20. However, considering the need for income support to farmers, we have provided Rs 20,000 crore in the revised estimate of the current fiscal and Rs 75,000 crore in the budget estimates of 2019-20.

The Interim Budget pegged the total expenditure for 2019-20 at Rs 27,84,200 crore, up from Rs 24,57,235 crore in the revised estimates of the current fiscal, which is a rise of approximately 13.3 per cent.
At the outset, Goyal said the paralysis of the past had been broken and India solidly put back on track and marching towards growth and prosperity.

The government had succeeded in breaking the back of the "back breaking" inflation which stood at 2.19 per cent in December. "If we had not controlled inflation, our families would have been spending around 35 to 40 per cent more today on basic necessities."