As coronavirus spread continues in India, COVID-19 cases saw the biggest spike for the third consecutive day on Sunday. 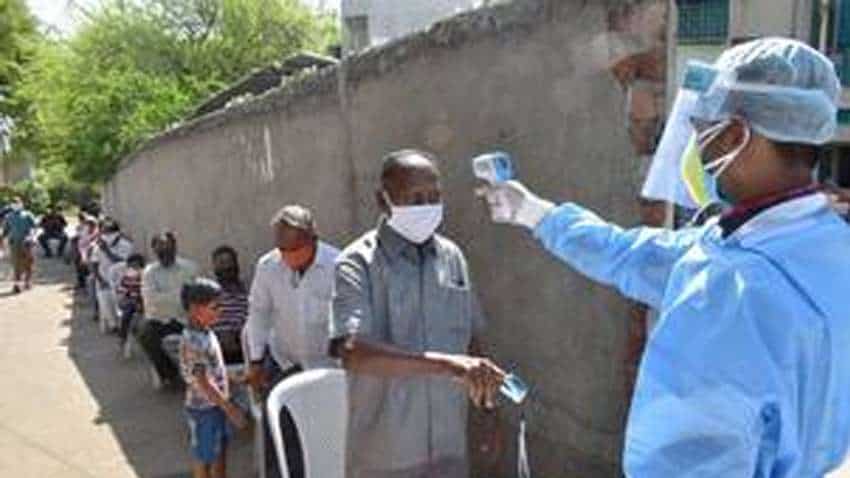 More than 70 per cent of the deaths are due to comorbidities, according to the ministry's website. PTI photo.
Written By: Prashant Singh
RELATED NEWS

As coronavirus spread continues in India, COVID-19 cases saw the biggest spike for the third consecutive day on Sunday with 6,767 new infections reported in the last 24 hours, taking the nationwide tally to 1,31,868, while the death toll due to the disease rose to 3,867 after 147 more fatalities, according to the Union Health Ministry. The active cases of the coronavirus disease rose to 73,560. While 54,440 people have recovered, one patient has migrated to another country, according to the ministry bulletin. "Thus, around 41.28 per cent patients have recovered so far," a Health Ministry official said, as per a report in PTI.

The total number of confirmed cases of the novel coronavirus pandemic includes foreigners. Of the 147 deaths reported since Saturday morning, 60 were in Maharashtra, 27 in Gujarat, 23 in Delhi, nine in Madhya Pradesh, seven in Rajasthan, five in Tamil Nadu, four each in West Bengal and Telangana, three in Uttar Pradesh, and one each in Andhra Pradesh, Jammu and Kashmir, Karnataka, Uttarakhand and Jharkhand

Of the total death toll of 3,867, Maharashtra tops the tally with 1,577 deaths, followed by Gujarat at 829, Madhya Pradesh at 281, West Bengal at 269 and Delhi at 231. The number of deaths due to the contagion in Rajasthan is 160, while 155 people died in Uttar Pradesh, 103 in Tamil Nadu and 56 in Andhra Pradesh. The COVID-19 death toll reached 49 in Telangana, 42 in Karnataka and 39 in Punjab. There are 21 fatalities in Jammu and Kashmir, 16 in Haryana and 11 in Bihar. Seven people have succumbed to the disease in Odisha, and four each in Kerala, Jharkhand and Assam so far. Chandigarh and Himachal Pradesh have recorded three deaths each, while Uttarakhand has recorded two deaths due to the virus. One fatality has been recorded in Meghalaya, the ministry said.

More than 70 per cent of the deaths are due to comorbidities, according to the ministry's website.

The highest number of confirmed cases in the country are from Maharashtra at 47,190 followed by Tamil Nadu at 15,512, Gujarat at 13,664 and Delhi at 12,910. There are 6,742 coronavirus cases in Rajasthan, 6,371 in Madhya Pradesh and 6,017 in Uttar Pradesh. The number of infections has gone up to 3,459 in West Bengal, 2,757 in Andhra Pradesh and 2,380 in Bihar. As many as 2,045 people have been infected with the virus in Punjab, 1,959 in Karnataka, 1,813 in Telangana, 1,569 in Jammu and Kashmir and 1,269 in Odisha. In Haryana, 1,132 people are afflicted with the deadly disease, while Kerala has 795 cases, followed by Jharkhand with 350 and 329 in Assam. As many as 244 cases have been reported in Uttarakhand, Chandigarh has reported 225 cases, while 214 people have tested positive for the virus in Chhattisgarh. A total of 189 people have tested positive in Tripura, while there are 185 cases of the pathogen in Himachal Pradesh, and 55 in Goa. Ladakh has reported 49 COVID-19 cases, while Andaman and Nicobar Islands has registered 33 infections. Manipur has registered 29 cases and Puducherry has recorded 26 cases. Meghalaya has 14 cases. Dadar and Nagar Haveli has reported two cases, while Arunachal Pradesh and Sikkim have recorded one case each.