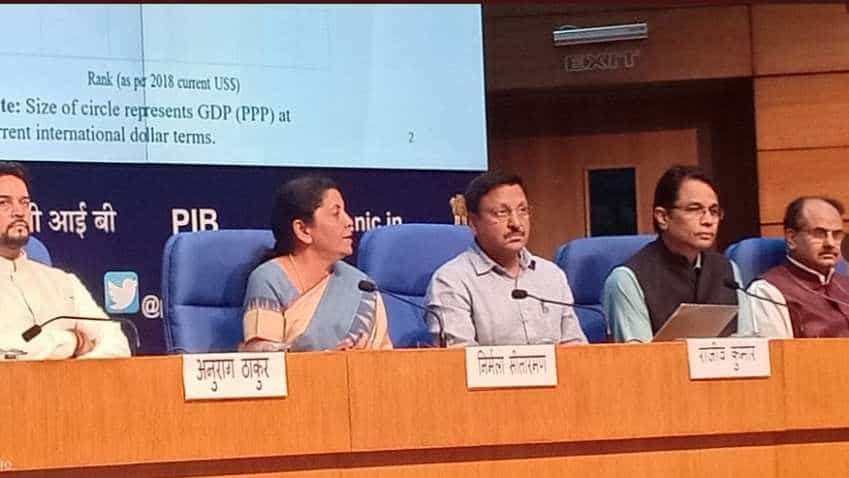 Nirmala Sitharaman said there will be faceless scrutiny from 'Vijay Dashmi' this year.
Written By: ZeeBiz WebTeam
Edited By: Harish Dugh
RELATED NEWS

Union Finance Minister Nirmala Sitharaman today announced measures decided by the Narendra Modi government to boost the economy. The biggest benefit annoucned by Sithraman was for FPIs and domestic equity investors. In order to encourage investment in the capital market, Sitharaman said that the government has decided to withdraw enhanced surcharge levied by the Finance No. 2 Act 2019. "In simple words, the enhance surcharge on FPI goes, surcharge on domestic investors in equity goes. Pre-budget position is restored," said Sitharaman.

Sitharaman said that the central government has kept reform at the top of its agenda since 2014 and they are maintaining the momentum. Addressing media at a press conference, Sitharaman allayed fears over the state of economy. She said that India's GDP growth continues high above other countries. She said that consumption growth is down in not just emerging but also advanced economies. A volatile situation has developed in global trade, she said.

The finance minister also announced that CSR violations will not be treated as a criminal offence and instead be as civil liabilities. On or after 1st October 2019 all the Income-tax orders, notices, summons, letters, etc shall be issued through a centralised computer system.

Sitharaman said there will be faceless scrutiny from 'Vijay Dashmi' this year, "which will mean that there shall not be even, that one odd over-enthusiastic officer who might go and sit & talk about things, which may be construed as harassment."