Bharti Airtel share price rallies 3%, but no, it is not over any new Reliance Jio killer type data offer

Bharti Airtel recently reported a 77.79 per cent fall in consolidated net profit at Rs 82.90 crore for the March quarter. The telco had logged a profit of Rs 373.40 crore in the corresponding quarter last year and Rs 305.80 crore in the December quarter. 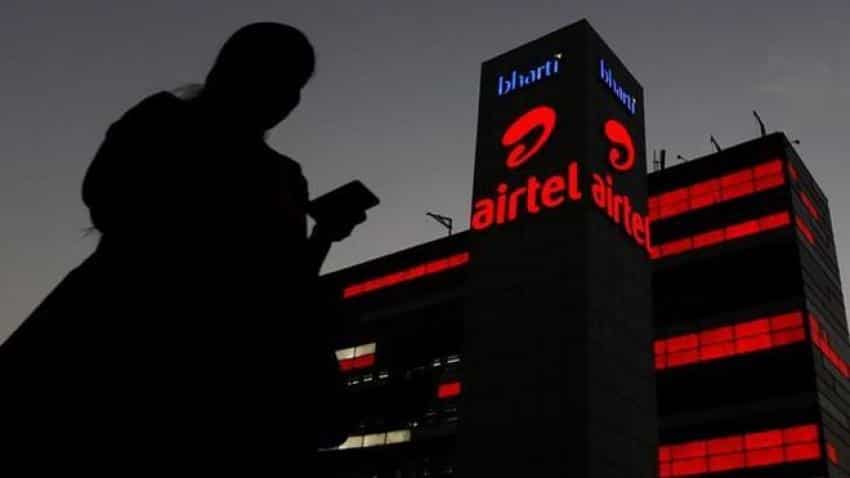 Bharti Airtel share price rallied as much as 3.42 per cent to Rs 418.25 on the BSE. Image source: Reuters
Written By: ZeeBiz WebTeam
RELATED NEWS

Bharti Airtel has been suffering big hits to its revenues since Reliance Jio was born. However, it has sought to fight back and is doing so with some standout call and data plan offers. Needless to say, Airtel share price has been suffering too much to the disappointment of its investors.. So, it has come as a surprise that Bharti Airtel share price rallied today. However, it is not over any new Reliance Jio killer type offers. Airtel share price surged over 3 per cent on Friday following news reports that the Sunil Mittal-led company is planning to raise as much as $1.5 billion by selling about 25 per cent stake in its Africa subsidiary Bharti Airtel International (Netherlands). Airtel expects to raise $150 crore by listing the holding company by early 2019. Significantly, the funds thus generated will be used for strengthening India operations, said Bharti Airtel.

Reacting to the news, the stock rallied as much as 3.42 per cent to Rs 418.25 on the BSE. The company recently reported a 77.79 per cent fall in consolidated net profit at Rs 82.90 crore for the March quarter. The telco had logged a profit of Rs 373.40 crore in the corresponding quarter last year and Rs 305.80 crore in the December quarter.

"Bharti is well poised to benefit from consolidation in the telecom industry as it will drive up ARPU, which in turn will boost profitability. The company can also meaningfully de-lever its balance sheet by monetising assets, which will help build capacity for future growth. The stock is trading at 9 times its FY19E EV/EBITDA. We maintain ‘BUY/SO’ with DCF-based TP of Rs 529," said brokerage Edelweiss Securities in a results review report.

Meanwhile, global ratings agency Standard & Poor's on Thursday revised down its outlook on telecom major to "negative" from stable, following weak financial performance in FY18 and concerns on elevated capex in the current financial year.

"We view an aggravation in price competition without any meaningful reduction in capex as key risks to a recovery in Bharti's financial performance," the rating agency said in a note.

The agency affirmed its rating on the  at 'BBB-', and the outlook was revised down to "negative" from "stable".

The revised outlook is reflective of the "risks associated with a recovery in Bharti's financial leverage over the next 12-24 months", it said.

The negative outlook reflects a one in three possibility that it may downgrade Airtel over the next 12-18 months if its business performance does not improve in line with our expectations, the rating agency added.