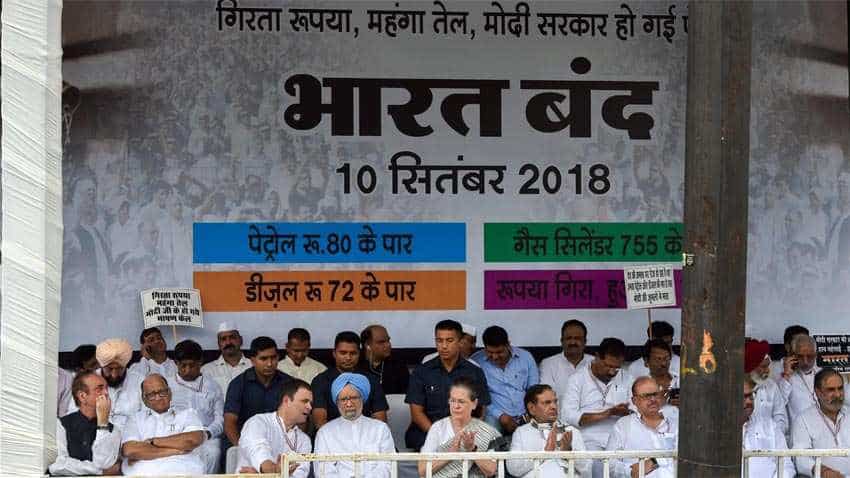 Bharat Bandh today: The Odisha government has declared that schools will remain closed on Monday to ensure the safety of the students. PTI
Written By: ZeeBiz WebTeam
RELATED NEWS

Indian Railways ferries around 32 lakh migrant workers in 2,570 Shramik Special trains since May 1

Bharat Bandh today: A day-long Bharat Bandh called by the Congress and Left parties to protest against rising petrol and diesel prices has received a mixed response from political parties as well as from the public. However, it has caused inconvenience to the public in terms of Indian Railways trains being cancelled to many markets being shut down. Here are 10 key developments:

1. East Coast Railway has cancelled 12 trains due to Bharat Bandh. Mumbai Metro services were disrupted for a short period on account of protests by political parties.

2. Fuel prices set new records on Monday with petrol and diesel retailing for Rs 80.73 and Rs 72.83 per litre respectively in Delhi. According to the price notification issued by state fuel retailers, petrol price was raised by 23 paise a litre and diesel by 22 paise per litre today.

3. Rajasthan Chief Minister Vasundhara Raje on Sunday announced that the state will reduce Value Added Tax (VAT) on diesel and petrol prices by four per cent. With the reduction, petrol and diesel prices will come down by an average Rs 2.50.

5. Bus services were affected in many states. Many private educational institutions also remained closed. MNS workers in Mumbai forcefully shut down shops and establishments at Bharatmata Junction Naka, Parel while Congress leader Sanjay Nirupam has been arrested during protests at Andheri station.

6. In West Bengal, the Trinamool Congress (TMC) has said it supports the issues raised by parties that have called for a nationwide shutdown, but it is against strikes since these lead to loss of working hours. The Biju Janata Dal (BJD), a non-NDA party, said although it is against the fuel price hike, it will not support the Bandh.

7. Delhi's ruling Aam Aadmi Party (AAP) made it clear that it will not join the 'Bharat Bandh' called by the Congress against rising fuel prices and falling value of the Indian rupee vis-a-vis the US dollar. Offices, schools and colleges in the national capital opened at regular time on Monday despite the 'Bharat Bandh' call.

8. The Odisha government has declared that schools will remain closed on Monday to ensure the safety of the students.

9. Petrol Pump Association in Madhya Pradesh said that the pumps will remain open despite Bharat Bandh call by the opposition parties.

10. Since May 2014, excise duty on petrol has gone up by 211.7 per cent, on diesel by 443.06 per cent. Central excise duty was revised upwards 12 times, said a Congress leader attacking the Modi government. Senior Congress leader Selja Kumari demanded petrol and diesel be brought under the ambit of Goods and Services Tax. She said petrol, diesel and LPG gas cylinder prices were skyrocketing due to heavy imposition of tax and the government should take immediate steps to provide relief to the people.

Indian Railways ferries around 32 lakh migrant workers in 2,570 Shramik Special trains since May 1