"Don't miss the forest for the trees", said Sanjiv Bhasin, while citing the stock market's optimistic scenario by the next year. 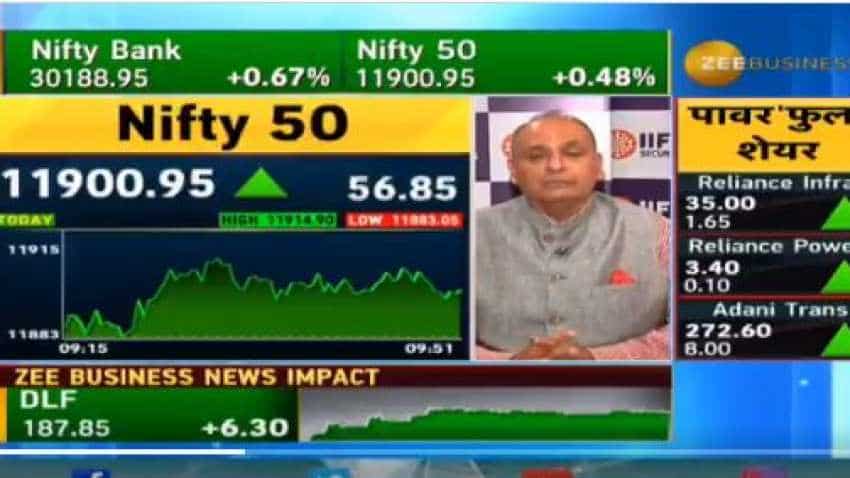 He reiterated that next 18 months will further go up, and mid caps will specially grow 2, 3, 4 times. Image source: Twitter/Zee Business

As the Sensex today reached a life time high of 40,392.22, and the Nifty too peaked close to 12,000 mark (11,902) after the US Federal Reserve slashed its interest rates for the third time this year and also because of teh Zee Business report that revealed that real estate will get infra tag. Going forward, Zee Business Managing Editor Anil Singhvi asked Sanjiv Bhasin, Director of IIFL Securities Ltd about the market rally in coming days. Bhasin said that this rise may stop for a short period but the trend will continue and by next Diwali, Nifty will certainly be at 14,000 mark.

"Don't miss the forest for the trees", said Sanjiv Bhasin, while citing the stock market's optimistic scenario by the next year. He reiterated that next 18 months will further go up, and mid caps will specially grow 2, 3, 4 times.

According to Bhasin, "Equity as an asset class is very good, and India equities, especially, will outperform," adding that "January onwards, global rally will start and India will lead from front not from the behind."

When Anil Singhvi asked for the specific reasons behind this global rally, Bhasin cited a few reasons given below:

1. We have witnessed lowest cost of funds in the last five years and a lot of funds is still lying as negative yield asset.

2. Global stocks markets have been affected by the US-China trade war, but this scenario is easing now.

3. The base effect has been so low, and there is no asset class

4. BRICS, which is an association of five major emerging economies, including Brazil, Russia, India, China and South Africa, lead the global rally.

5. FII selling that we witnessed in the last 6 to 8 month will come back again and will boost the stock market.

In his concluding remark, Bhasin added, "In the next 18 months, equities will regain their mojo and be the number one asset class globally."

Gujarat Elections 2022: From Godhra to Morbi - 25 key VIP seats to watch out for