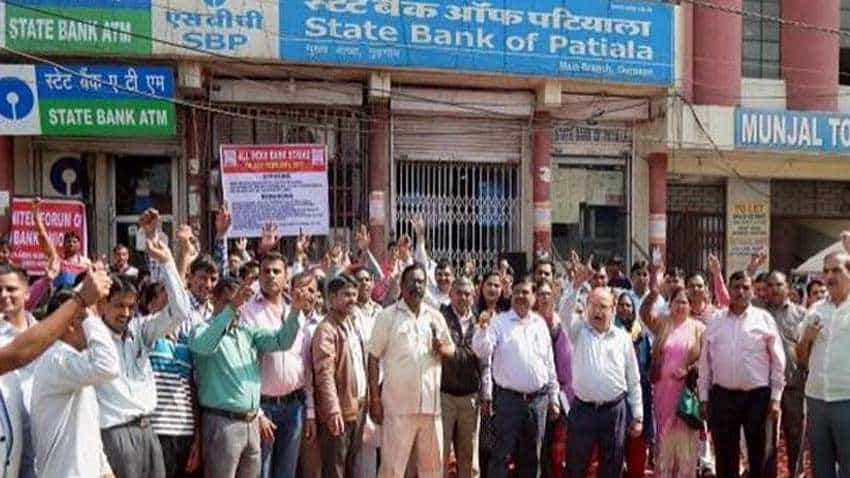 The union has alleged that the government has failed to create jobs. Representational Image, Source: PTI.

Bank strike today: The nationwide strike by central trade unions against the alleged anti-worker policies and unilateral labour reforms entered its second day Wednesday. The bank strike has affected normal life in many parts of the country as public transport and banking services remain disrupted for the second day in some states. Even though operations in State Bank of India (SBI) and private sector banks like ICICI Bank, HDFC Bank, Axis Bank, Yes Bank remained unaffected, the participation of All India Bank Employees' Association (AIBEA) and Bank Employees' Federation of India (BEFI) resulted in a hit on banking operation where these two unions are strong.

The 10 central trade unions (CTUs) which have given a call for the two-day Bharat Bandh are protesting the government's snub of their 12-point charter of demands seeking minimum wage of Rs 18,000. They are also agitating against government's decision of not approving social security for all workers and issue related to price rise.

All India Trade Union Congress General Secretary Amarjeet Kaur said that Goa and Bihar will witness a complete bandh while 100 per cent strike is expected in other parts of the country too. She said that due to UGC exams, which started from Tuesday, some state transport departments would not participate completely in the strike in the interest of students.

The union has alleged that the government has failed to create jobs and grossly ignored unions' 12-point charter of demands. It released a join statement on Monday saying that the government undermined tripartism and continued its "aggressive attack with arrogance on the lives and livelihood of the working people."

Apart from this, the unions also oppose the proposed amendments in Trade Union Act, 1926, saying those are irrational and extremely damaging to the independent functioning of unions.

Due to this strike, educational institutes, rail, banking, postal and transport services are expected to witness disruption on Wednesday too.