Bank Strike on 26 December 2018: Services in most of the banks, including private lenders, will be hit on Thursday (December 26) due to a strike called by around one million employees of various banks. 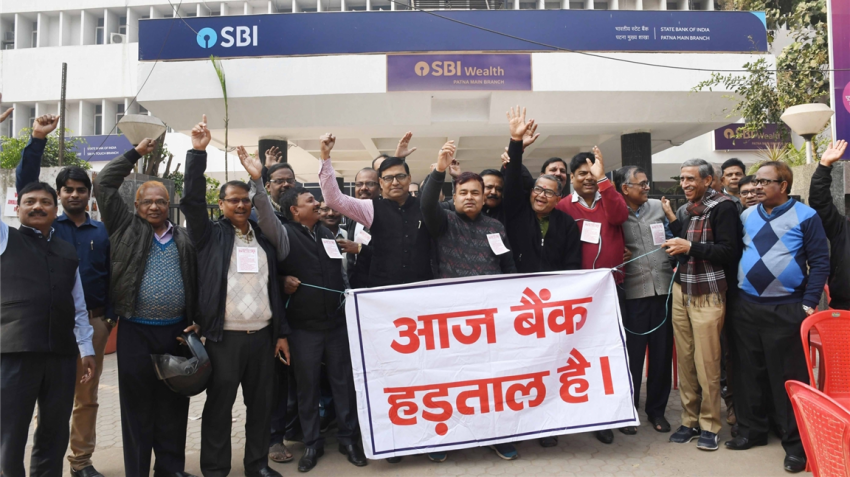 Patna: Bank employees stage a demonstration to press for their demands in Patna on Dec 21, 2018. Banking services across India were affected on Friday as over 3.2 lakh bank officers struck work demanding unconditional mandate for the 11th bi-partite wage
Written By: ZeeBiz WebTeam
RELATED NEWS

Bank Strike on 26 December 2018: Services in most of the banks, including private lenders, will be hit on Thursday (December 26) due to a strike called by around one million employees of various banks. The bank employees are protesting against the proposed amalgamation of Vijaya Bank and Dena Bank with Bank of Baroda. The strike call from the bank employees comes days after officers union of state-run banks observed a day-long strike on last Friday on similar grounds along with demand for immediate settlement of their wage negotiations.

The merger of state -owned Vijaya Bank and Dena Bank, both under the prompt corrective action (PCA) framework of the RBI, with Bank of Baroda, was announced in September this year. The merger would create India's third largest lender.

"This amalgamation is not in the interest of banks or bank customers. It is rather detrimental to both," the United Forum of Bank Unions (UFBU) said in a statement.
The UFBU is an umbrella organisation of nine unions, including the All-India Bank Officers Confederation, the All- India Bank Employees Association and the National Organisation of Bank Workers, among others.

The unions claims the government wants banks to grow in size by this amalgamation However, even if all public sector banks are bundled into one, the merged entity cannot find a place among the top 10 globally.

The unions say post-merger, a large number of branches will be closed and customers will be have to face hardships as already banks are burdened with various government schemes such as Jan Dhan Yojana, Mudra, social security insurance, and PM's housing scheme, among others.

The bank unions will take out a rally and hold a demonstration at the Azad Maidan in South Mumbai.

On December 21, around 3.20 lakh officers from various state-run banks were on a one-day strike, seeking immediate wage revision and opposing the proposed merger. The nation-wide strike had partially impacted banking operations affecting services like deposits and withdrawal at branches, cheque clearances and issuance of demand drafts, among others.

Bank managements have mandated the industry lobby Indian Bank Association (IBA) to negotiate for scale 1-3 but unions want this to be raised up to scale 7. The wage talks are on for the past 13 months between the unions and IBA, the latter has offered a wage revision of 8 just per cent. In the past wage settlement, which was for the period November 1, 2012 to October 31, 2017, the employees got a 15 per cent hike.

The scheme will be subsequently vetted by respective boards of the three banks. It will have details of share swap ratio and requirement of capital from the promoter, sources said.