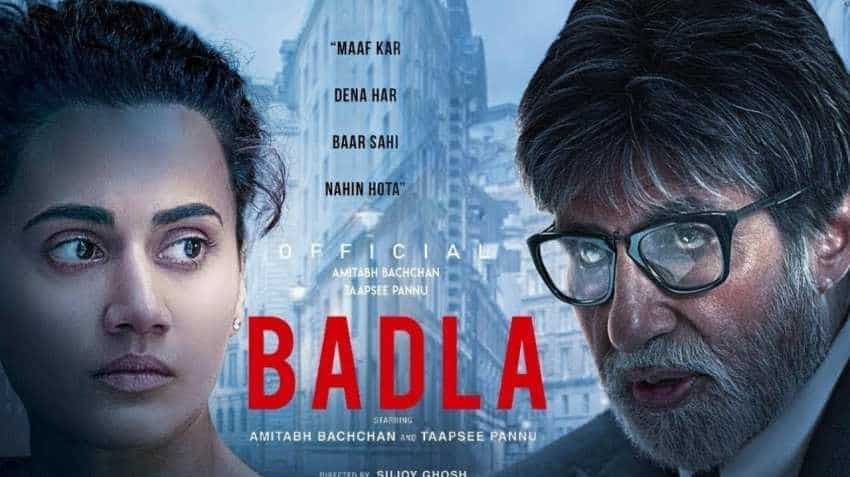 Badla Box Office Collection: Bollywood superstar Amitabh Bachchan and Taapsee Pannu starrer Badlaa has made its mark at the box office, with gross earning of Rs 36 crore in 5 days. Sujoy Ghosh, who is known for making Bollywood thrillers like Kahaani and short film Ahalya, is once again charming movie goers with his crime-thriller. Badlaa has also opened to good reviews for its direction as well as performances.

Looking at gross earnings of the film, which on Tuesday, performed better than Monday, adding Rs 3.85 crore to the total, which is at Rs 30 crore (collections from theatres across India) in five days.

Although Badla is facing tough competition from Hollywood's superhero film Captain Marvel, which has stayed ahead of the Sujoy Ghosh-directed film from the beginning, the film is making headway with excellent performance of Taapsee Pannu and Amitabh Bachchan who reunited on the big screen after the success of Pink.

The duo is stated to be working yet another project, which is yet to be announced, as Taran Adarsh tweeted, "IT’S OFFICIAL... Taapsee Pannu and director Anurag Kashyap reunite [after #Manmarziyaan] for a supernatural thriller... Not titled yet... Produced by Sunir Kheterpal [who just produced #Badla]... Will be filmed in a start-to-finish schedule in Nov-Dec 2019... Summer 2020 release."