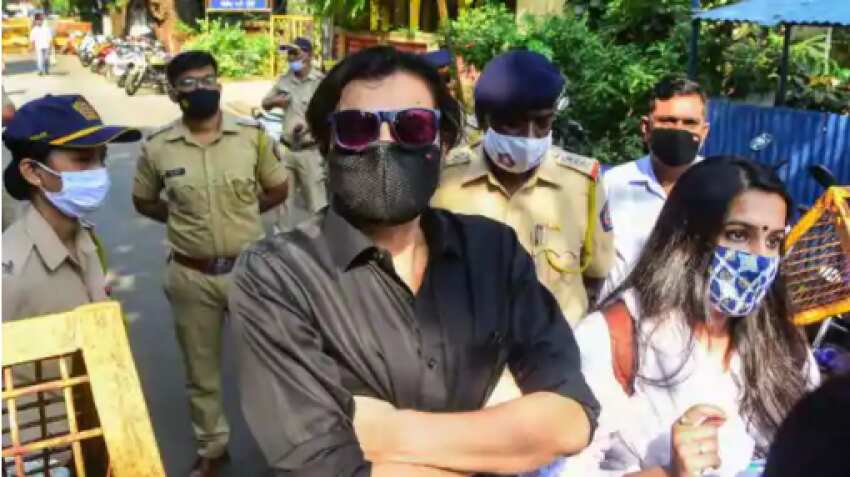 A court at Alibaug in Maharashtra's Raigad district on Wednesday remanded Goswami and two other accused in judicial custody till November 18 in a 2018 abetment to suicide case. Source: PTI

Arnab Goswami arrest news: Republic TV Editor-in-Chief Arnab Goswami, arrested for allegedly abetting the suicide of an interior designer, spent the night at a local school which has been designated as a COVID-19 centre for the Alibaug prison, an official said on Thursday.

A court at Alibaug in Maharashtra's Raigad district on Wednesday remanded Goswami and two other accused in judicial custody till November 18 in a 2018 abetment to suicide case.

Police had sought Goswami's custody for 14 days, but the court held that custodial interrogation was not required.

On Wednesday night, Goswami was taken for medical examination at a state-run hospital in the coastal town, the official said.

After the medical exam, he was taken to Alibaug Nagar Parishad School, which is designated as a COVID-19 centre of the Alibaug prison, and he spent the night there, the official said.

Goswami and the two others were booked under section 306 (abetment of suicide) and 34 (common intention) of the IPC in connection with the suicide of architect-interior designer Anvay Naik and Naik's mother over alleged non-payment of dues by Republic TV.

The other two arrested accused in the case, Feroze Mohammed Shaikh and Nitesh Sarda, were also produced in the Alibaug court on Wednesday and remanded to judicial custody till November 18.

Naik, in his purported suicide note, had mentioned the names of Goswami, Shaikh and Sarda, police said, adding the note was sent to handwriting experts in Pune and a report is awaited.

Hearing on Goswami's bail application will be on Thursday at Alibaug court, an official said.

Goswami had on November 2 filed a petition in the Bombay High Court seeking to quash the FIR in the case. It will be heard by a division bench of Justices S S Shinde and M S Karnik on Thursday.

A team of Raigad police picked up Goswami (47) from his Lower Parel house in Mumbai on Wednesday morning. He was seen being pushed into the police van, and claimed that he was assaulted by police before being taken away.

Goswami was produced in a court in Alibaug, around 90 km from Mumbai, and was remanded to judicial custody till November 18. The court ruling came shortly after 11 pm.

Mumbai police have registered an FIR against Goswami, his wife, son and two others for "obstructing, assaulting, verbally abusing and intimidating" a police officer on duty and for tearing up "government papers" (arrest intimation) at his house, the official said.

The FIR was registered at the N M Joshi Marg police station on Wednesday under sections 353, 504, 506 of IPC and section 3 of the Damage of Public Property Act, the official said.