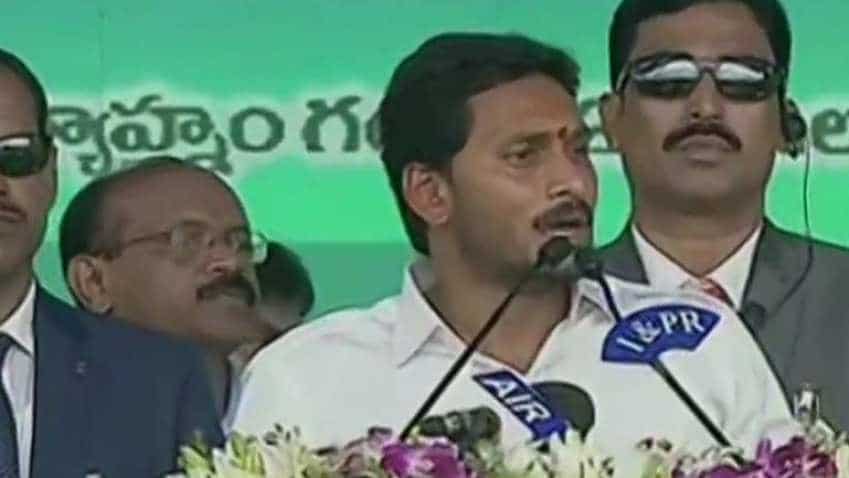 The YSR Congress Party government of Andhra Pradesh today presented over Rs 2.27 lakh crore budget for 2019-20, an increase of 19.32 per cent over the previous year. Presenting his maiden budget in the state Assembly, Finance Minister B Rajendranath proposed expenditure of Rs 2,27,974.99 crore, comprising Rs 1,80,475.94 crore revenue expenditure and Rs 32,293.39 crore capital expenditure. The key highlight of the budget which focussed on implementation of its poll promises are:

2. B Rajendranath said the fiscal position this government inherited has compelled it to make some very hard choices between wealth creation and welfare programs. The debt of the residuary state at the time of bifurcation was Rs 1,30,654 crore has reached Rs 2,58,928 crore by 2018-19.

3. According to Rajendranath, "There is a resource gap of around Rs 45,000 crore to fulfill the commitments under Budget 2019-20 Vote on Account presented in February. This resource gap is further amplified by the budget necessary for our new programsmes."

4. Underlining the need for Special Category Status for Andhra Pradesh, Rajendranath appealed to Prime Minister and Government of India to fulfill the promise made at the time of state`s bifurcation in 2014. He listed out a series of announcements made during last one month to increase the remuneration of various categories of employees engaged in last mile service delivery. The enhanced remuneration will benefit around 3.17 lakh people.

5. The finance minister allocated Rs 250 crore for the steel plant at Kadapa. Chief Minister YS Jagan Mohan Reddy will lay the foundation stone for the plant this year to fulfill the long pending demand of Rayalseema region. Allocating Rs 500 crore for the development of capital city of Amaravati, the FM said the government is committed to complete the Polavaram project by June 2021 by according it highest priority and providing it sufficient budget.

6. Under Jagananna Ammavodi scheme, the Government will provide Rs. 15,000 to every mother who sends her children to school or junior college (class 1 to 12). A budget allocation of Rs 6,455 crore has been proposed for the scheme which will benefit around 43 lakh mothers and improve all the parameters relating to education. Another Rs 1,500 crore for improving infrastructure and quality of education in all government schools. A provision of Rs 4,962 crore was made for 100 per cent fee reimbursement to the post-matric students belonging to various categories.

7. He announced that Arogyasri , free health insurance scheme for poor, will be expanded to cover all the households with annual income of less than Rs 5 lakh per annum, all the cases where the medical expenses cross Rs 1,000 and without any limit on cost of treatment. All types of ailments and surgeries will be covered under Arogyasri. He proposed to allocate Rs 1,740 crore for this scheme.

8. The government allocated Rs.1,150 crore to help 11.5 lakh victims of Agrigold scandal in the state. The Agrigold Group of companies had collected deposits from public with the lure of offering high interest rates. Rajendranath made substantial allocations for various schemes promised by Jagan Reddy during the election campaign.

9. He proposed an outlay of Rs 8,750 crore for YSR Rythu Bharosa, under which every farmer will be provided an investment support of Rs 12,500 every year. The scheme will benefit 64.06 lakh farmers, including 15.36 lakh tenant farmers. The FM allocated Rs 1,163 crore for YSR Crop Insurance Scheme to pay the current share of farmers` crop insurance relieving them of any burden in crop insurance. This will benefit 60.02 lakh farmers.

10. As part of Rythu Bharosa, the government has promised to drill borewells free of cost and a provision of Rs 200 crore is proposed in the budget. He proposed to set up a Price Stabilization Fund with a corpus of Rs 3,000 crore to enable market intervention in both agriculture and horticultural crops to ensure just price to farmers. Similarly, he proposed to set up a Natural Calamities Fund of Rs 2,000 crore which will help farmers in case of losses incurred due to climatic vagaries.

11. Stating that liquor consumption is a social evil and is severely damaging the social fabric, he said as a first step towards imposing prohibition, the government has started taking stringent action on abelt shops` (illegal extensions of licensed liquor shops). In the next phase, government will take control over the sale and the consumption.