The registration for Amarnath Yatra has been suspended in the view of spiraling Covid-19 cases. This comes in the wake of stricter guidelines announced by respective state governments to contain spread of coronavirus infection. 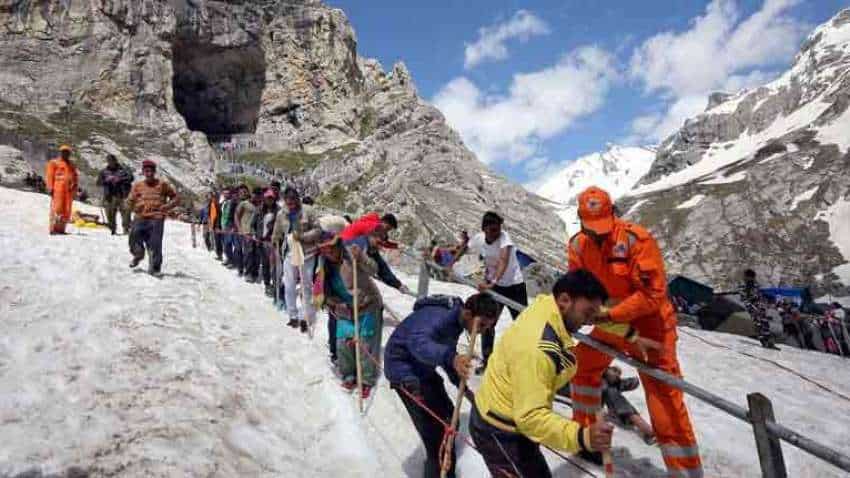 Amarnath Yatra 2021: This year`s 56 day-yatra will commence simultaneously on both routes from June 28 and culminate on Raksha Bandhan, August 22.
Reported By: ZeeBiz WebTeam
Written By: ZeeBiz WebTeam
Edited By: Harish Dugh
RELATED NEWS

The registration for Amarnath Yatra has been suspended in the view of spiraling Covid-19 cases. This comes in the wake of stricter guidelines announced by respective state governments to contain spread of coronavirus infection. The information was shared by Shri Amarnathji Shrine Board on Thursday, said news agency ANI.

The board further said that the situation is being constantly monitored and it will be reopened once it improves.

Online registrations for this year`s Amarnath Yatra commenced on April 15.

This year`s 56 day-yatra will commence simultaneously on both routes from June 28 and culminate on Raksha Bandhan, August 22.

Nitishwar Kumar, Chief Executive Officer, Shri Amarnathji Shrine Board had earlier informed that the intending yatri shall have to visit the official website for registration. The yatri will then be guided for the steps to be followed.

"They will have to fill up his details in the online application form and attach his photograph and the Compulsory Health Certificate (CHC)," said the CEO.

He said that for ensuring against fraudulent health certificates, only such certificates which are issued by doctors/medical institutes authorised by the concerned state government/UT administrations shall be accepted for the online registration.

The CEO further informed that persons under the age of 13 years or above the age of 75 years and ladies who are more than six weeks pregnant would not be registered for this year`s yatra.

For Yatra 2021, only those health certificates which have been issued after March 15 shall be valid.

The CEO informed that the yatris shall be able to download the yatra permits after their applications have been duly processed.

The yatris will have to carry their original Photo ID and CHC with them during the yatra.

Kumar further stressed that for ensuring effective security arrangements along the difficult tracks, only those yatris who are in possession of a yatra permit which is valid for a specified date and route will be allowed to proceed beyond the base camps, and cross the entry gates at Domel and Chandanwari.

The yatris who propose to travel by helicopter do not require registration as their helicopter tickets shall suffice for this purpose.

However, they shall be required to produce the Compulsory Health Certificate,(CHC) in the prescribed format issued by an authorised doctor, before they are allowed to travel by helicopter.
Source: ANI