Affordable Housing is an interesting segment and will keep our business running in future: Siddhartha Mohanty, LIC Housing 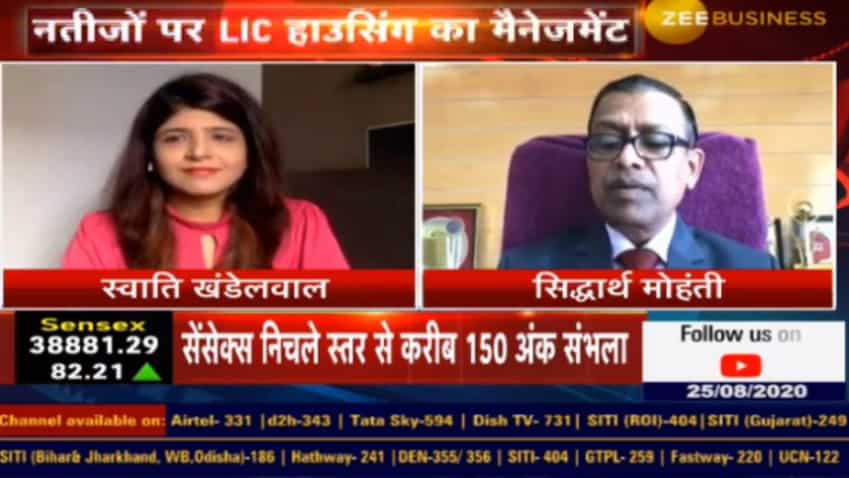 Q: LIC Housing has reported good numbers in June quarter but we have seen a decline in provisioning numbers. Take us through it have you created enough provisioning here and what is your outlook on provisioning?

A: We have made provisioning more than it was required for the June quarter. Our provisioning stands at 45.32%. We have provisioned Rs 2,668 crore as compared to our entire NPA which stands at Rs 5,888 crore. So adequate provisioning has been made and there is no matter of concern in it.

Q: How was your asset quality and tell us about the segment where maximum stress was seen?

A: The asset quality that was NPA until March 2020 has remained intact till date. Our NPA ratio in June quarter in comparison to Ind-As has been maintained at the same 2.83 level as it was in the March quarter. Because there is a moratorium that's why there is no matter of concern as there has been no decline in it.

Q: During the March quarter you said that you expect a decline in NPA but it didn’t happen and we have seen an increase thereafter the lockdown and moratorium. So, what kind of situation is evolving in the coming quarters and how you will deal with the stress?

A: The second quarter is going on and the moratorium will come to an end on August 31, 2020. Luckily, we have created a special task force who are in continuous touch with each account and borrower, who opted for a moratorium, as they were standard asset till March 2020 and we wish that they start paying their EMIs from September and we are trying for it. So I feel that there is no possibility of a significant decline in the individual loan accounts as we are personally monitoring each account. The payment process will start in September as moratorium will end in August. We expect that the asset quality will be maintained and be good in the individual loan accounts.

Q: How much percentage of your loan book is under moratorium and what kind of movement is expected there?

Q: But what percentage of the overall loan book is under moratorium and what kind of situation is panning out there?

A: More than 29% of the total book size was under moratorium in May and June after the moratorium was announced by the Reserve Bank of India (RBI). But as on date, it has remained within 25%. And, if you look at this 25% then the individual loan book in the individual housing segment is just 16%. If seen in the terms of numbers then less than 12% borrower has availed moratorium. That’s why those who have opted for a moratorium at the initial stage have started paying the EMIs and are not waiting for the moratorium to end with a thought that they will start paying from September. They took moratorium in May and started paying from June, July and August. We are also experiencing that we are getting our money in the form of EMIs. So, if there is any feeling that a serious situation is likely to be created in September then at this point of time I am not feeling such a situation will be created.

Q: How were the disbursement growth in this quarter and name the segment from which good demand is coming?

A: Nothing happened in any organization in the month of April because the pandemic hit immediately and virtually none of us were aware of the direction in which it will move. We worked well from the last week of May to June. Disbursement of approximately Rs 3,560 crore was made in the first quarter of the financial year 2020-21 of which the most part was disbursed in June. Disbursement of less than Rs 950-1,000 crore was made in April and May. The amount disbursed in the first quarter is less when compared to the amount disbursement last year in the same quarter. But a trend has emerged after June has continued in July and August and we experienced that there has been positive growth in these two months this year as compared to the same months of last year. So, I expect that a better disbursement will be seen in the ongoing second quarter. As far as the segment is concerned then maximum growth was seen in the affordable loan segment and Pradhan Mantri Awas Yojna had 30% share in it. Going forward, the affordable loan segment will keep our business running. More and more people are likely to take a loan, now. This is a perfect time to get a loan because prices have stabilized and enough liquidity is available in the market and the loans are available at competitive rates and we have also provided a good product to the market. So this is the best time for those who are deciding to buy homes.

Q: RBI has issued some rules in June for the housing finance companies (HFCs) and has put certain restrictions in lending to builders. There are strict norms on the capital front. What is your view on this announcement and what is the proportion of LAP in your total loan portfolio?

A: We are almost compliant with each rule that has been proposed by the RBI. LIC Housing Finance company is compliant to everything including, the definition of the housing finance company and capital. So I don’t think that it will create any issue for us in the coming times. Rather, we feel that it will improve things further.