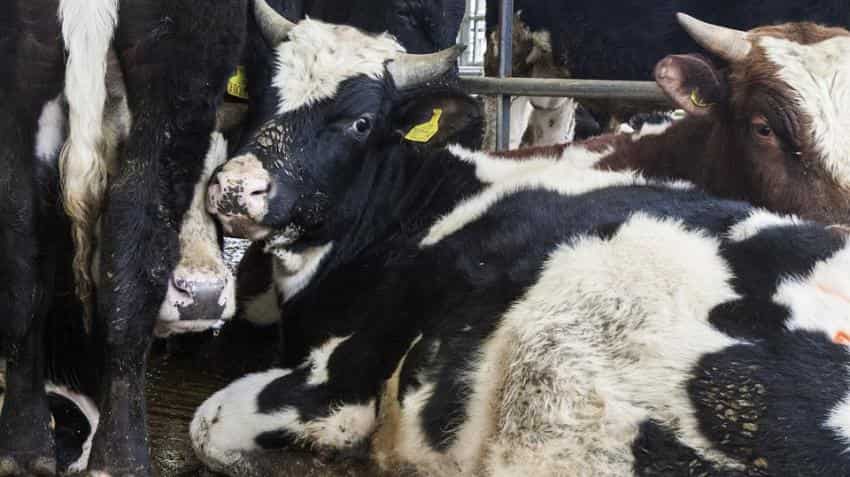 The panel said even where animals are travelling with a licence across the border, care may be taken to check the manner in which they are being transported to prevent cruelty to them. Image Source: Pixabay
Written By: PTI
RELATED NEWS

A unique identification number (UID) for animals has been suggested by an expert panel to evolve a mechanism to stop trafficking of cattle across the Indo-Bangla border, the Centre today told the Supreme Court.

The committee, set up in pursuance of the court order, has recommended having tamper-proof identification of cattle by using polyurethane tags and a state-level data base may be uploaded at a website which may be linked with a national online database.

The recommendations were placed before a bench of Chief Justice J S Khehar and Justice D Y Chandrachud which listed the PIL filed by Akhil Bharat Krishi Gosewa Sangh for tomorrow for passing directions by considering these recommendations.

The issue before the apex court also included concern over smuggling of cattle to Nepal for being sacrificed at the Gadhimai festival, held once in five years, and a petition relating to it filed before the festival in 2014.

The instant petition concerning trafficking of cattle to Bangladesh was filed by Akhil Bharat Krishi Gosewa Sangh. A similar plea was filed by animal rights activist Gauri Maulekhi, seeking directions to the Centre and states like Bihar, West Bengal, Uttarakhand and Uttar Pradesh, which share the border with Nepal.

During the hearing, Solicitor General Ranjit Kumar, appearing for Centre, informed the court that the government has considered recommendations of the committee and the court may now pass directions based on them to states as the issue fell in the state-list of the Constitution.

The panel, in its recommendations, said, "The committee recommends that Chief Secretary of respective states to regularly monitor the performance of various departments of the state governments, including RTO, state police and animal husbandry department and ensure prevention of cattle smuggling /illegal transportation of cattle by way of periodic reports.

"At the central level, monitoring could be done by Ministry of Environment and Forest and Climate Change (MoEF&CC)/Department of Animal Husbandry, Dairying and Fisheries (DADF)."

"Ministry of Agriculture, Government of India, has devised a method of tamper proof identification of cattle using polyurethane tags with a unique identification number sequence. This may be made mandatory for all cows and their progeny throughout India for all cattle that is owned. Already mass tagging of cattle for insurance purpose is being done by livestock development boards and animals husbandry department of state governments," it suggested.

It also said that each animal has to be tagged with a unique identification number with proper records of identification details like age, breed, sex, lactation, height, body colour, horn type, tail switch and special marks.

It said the Foreign Trade (Development and Regulation) Act read with Export Import Policy (Exim policy) of India mandates that cattle can only be exported from the country with a valid licence from the regional licensing authority.

"In order to check the smuggling of livestock across India's borders, there may be strict enforcement of the EXIM policy by the relevant customs authorities, transport department, police and border guarding forces as per the law," it recommended.

The panel said even where animals are travelling with a licence across the border, care may be taken to check the manner in which they are being transported to prevent cruelty to them.

It advocated seeking of cooperation from public to give information on the movement of animals for the purpose of smuggling through helpline numbers of BSF and state police.

Regarding compliance of the July last year's order of Himachal Pradesh banning cow slaughter in the country and imposing prohibitions on import and export of cow and sale of beef, the report said that an effective curb on illegal interstate transportation of cattle was "difficult" because of the varied legal provisions from state to state.

"The compliance of the order would entail making a uniform act for cow preservation and protection in India. This will certainly help in reducing grey areas and ensuring implementation to a better extent," it said.