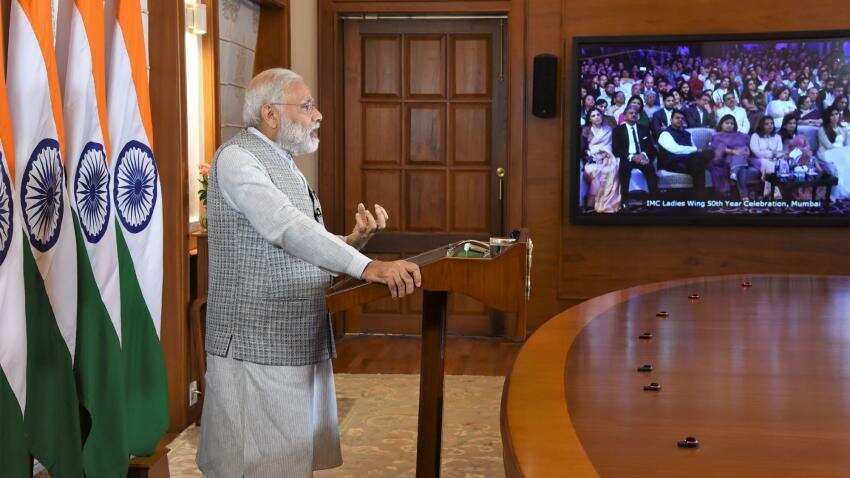 Any Indian without access to smartphones, internet, debit or credit cards will be able to transact digitally through this platform, realising Ambedkar`s vision of social and financial empowerment for all. Image Source: IANS
Written By: IANS
RELATED NEWS

Prime Minister Narendra Modi will launch the BHIM-Aadhaar digital payments platform to boost the digital payments revolution on the occasion of the 126th birth anniversary of Babasaheb Bhimrao Ambedkar, here on Friday.

BHIM-Aadhaar, the merchant interface of the BHIM App will pave the way for digital payments by using the Aadhaar platform enabling each Indian to pay digitally using their biometric data on a merchant`s biometric-enabled device like a SmartPhone with a biometric reader.

Any Indian without access to smartphones, internet, debit or credit cards will be able to transact digitally through this platform, realising Ambedkar`s vision of social and financial empowerment for all.

Already, 27 major banks are now on board this platform with 300,000 merchants to start accepting digital payments.

Modi will launch two new incentive schemes for the BHIM-Cashback and Referral Bonus with an outlay of Rs 495 crore for a six-month period to ensure permeating digital payments culture to the grassroots.

Under the Referral Bonus Scheme, both the existing user who refers BHIM and the new user who adopts it would get a cash bonus credited directly to their accounts.

Under the Cashback scheme, the merchants will get a cashback on every transaction using BHIM.

NITI Aayog CEO Amitabh Kant said that these schemes - to be administered by MEITY and implemented by NPCI - will provide a major impetus to the digital payments revolution in India.

Notching over 1.90 crore downloads in past four months, the BHIM App has already created a world record besides an unprecedented increase in number of transactions made using several user-friendly digital payment methods.

Similarly, Aadhaar Enable Payments have doubled from 2.5 crore in November 2016 to over five crore in March 2017, and Immediate Payment Service transactions jumped from 3.6 to 6.7 during the same period.

With a view of achieving 2,500-crore digital transactions during the current fiscal, Modi will announce about 75 townships across as `less-cash townships`.

A `less-cash township` is one where the deployment of payment acceptance infrastructure is complete, all the families there are covered under training programs.

These townships have been assessed independently by PWC and only those with more than 80 per cent of the total number of transactions conducted through digital modes during the review period have been selected.

These townships are likely to generate over 1.50-lakh digital transactions daily, or around 5.50 crore per annum.

Modi would felicitate some of the winners of the Mega Draw here on Friday, a testimony to the spread of digital payments revolutionising the country.

The 100-day campaign in 100 cities saw over 15,000 institutions going cashless in 27 states and seven union territories and lakhs of people opening new bank accounts and getting new Aadhaar Cards.