Punit Goenka will continue as the Managing Director (MD) and Chief Executive Officer (CEO). The Board of Directors of ZEE Entertainment Enterprises (ZEEL) unanimously provided an in-principal approval for the merger between ZEEL and Sony Pictures Network India (SPNI). 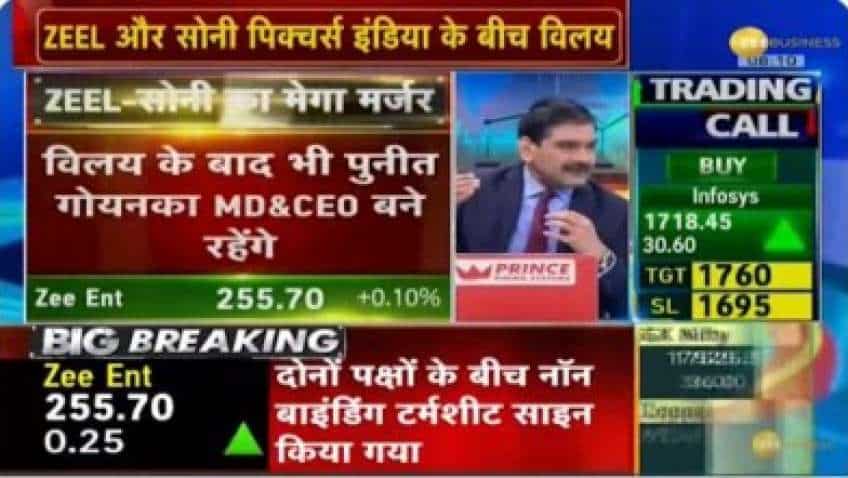 Punit Goenka will continue as the Managing Director (MD) and Chief Executive Officer (CEO). The Board of Directors of ZEE Entertainment Enterprises (ZEEL) unanimously provided an in-principal approval for the merger between ZEEL and Sony Pictures Network India (SPNI).

“It is an integral part of the proposed merger that Punit Goenka continues to be the Managing Director and CEO of the merged entity,” The company said in its statement.

The company is ultimately run by those at the top management and who provide leadership and Punit Goenka has done that for Zee Entertainment, Zee Business Managing Editor Anil Singhvi said. Sony has recognised his contribution and importance in this, the Market Guru said.

Singhvi said that a media Group like Sony which is an international media behemoth has entrusted its confidence in Punit Goenka and asked it to run not only Zee Entertainment nut also the merged entity. Sony will have a majority stake in the merged entity.

Sony has decided that Punit Goenka will run its Indian Business. There cannot be a bigger certificate on the approval ratings of the top management of Zee Entertainment.

This level of confidence in the management of Zee Entertainment by a company that was once one of its biggest competitors is unprecedented, Singhvi said.

“Further, certain non-compete arrangements will be agreed upon between the promoters of ZEEL and the promoters of SPNI. According to the term sheet, the promoter family is free to increase its shareholding from the current ~4 to up to 20 per cent, in the normal course of business. Majority of the Board of Directors of the merged entity will be nominated by Sony Group,” the statement said.

The parent company of SPNI, Sony Pictures Entertainment will also infuse USD 1.575 billion at closing, for use and pursuing other growth opportunities. Basis the existing estimated equity values of ZEEL and SPNI, the indicative merger ratio would have been 61.25% in favour of ZEEL.

The resultant merger ratio is expected to be 47.07% held by ZEEL shareholders and the balance 52.93% held by SPNI shareholders. The merger between ZEEL and SPNI is considered to be a win-win deal as the both the companies will now be able to share the content, distribution and enjoy each other’s digital space.

The merger is in line with ZEEL’s strategy of achieving higher growth and profitability as a leading Media & Entertainment Company across South Asia. The Board has authorized the management of ZEEL to activate the required due diligence process, the company said in a statement on Tuesday.