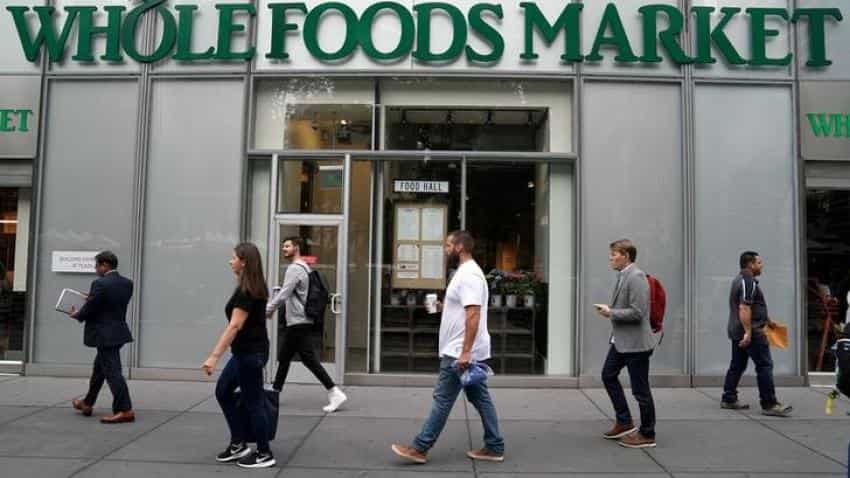 With Whole Foods, Amazon on collision course with Wal-Mart

Whole Foods Market Inc shares added to their gains on Monday after Amazon.com Inc announced plans last week to buy the upscale grocer, with investors betting that rivals could step in to create a bidding war.

Amazon shares also rose as Wall Street analysts lauded the proposed $42-per-share deal and bet that the company would prevail in any bidding battle.

“We thought Amazon was thrifty in its offer," said Charles Kantor, managing director at Neuberger Berman Investment Advisers LLC, which owns around 2.7 % of Whole Foods shares and had pressured the company to take steps to improve its stock price.

“I think there’s the argument that Amazon acquired Whole Foods for free," he said. "The reaction of shareholders suggests that Amazon has left themselves lots of room to pay more for this strategic asset."

Some investors suspected other companies were weighing a rival bid.

“Every grocery store out there now is having a conversation about how much they can afford to spend to keep Amazon out of the space,” said Brian Culpepper, a portfolio manager at James Advantage funds.

Culpepper, who owns Kroger Co shares, said Kroger is the company that would be most likely improve Whole Foods’ efficiency, but that it would have difficulty matching Amazon’s cash offer.

“Kroger would have to pay in stock, and their stock has been hurting,” giving them less leverage to get into a protracted bidding war with Amazon, Culpepper said.

Barclays analyst Karen Short raised her Whole Foods price target to $48 from $38 and upgraded the stock to overweight from equal-weight, citing the possibility of counterbids.

"Many will do anything to either make this acquisition more costly for Amazon, or prevent the asset from landing in Amazon`s lap," Short wrote in a note to clients.

A $48-a-share price tag would be more than reasonable for a fellow retailer that could eliminate overhead at Whole Foods, Short said, while adding that very few companies could outbid Amazon.

Amazon`s offer of $13.7 billion, representing a multiple of 10 times earnings before interest, tax, depreciation and amortization, could possibly be raised to 11 or 12 times, according to Kevin Dreyer, co-chief investment officer at Gabelli Funds, which holds Whole Foods shares.

"Fourteen billion is a big number but it’s not a number where there’s no other buyer," said Dreyer. "Others could certainly look at this and sharpen their pencils."

Wal-Mart Stores Inc could have sufficiently deep pockets to make a counter bid and other grocery rivals such as Kroger or Albertsons Cos Inc would have the motivation, he said.

Any of the big grocery chains that bid on Whole Foods would likely win antitrust approval to buy the premium grocery chain, according to three antitrust experts.

Any buyer of Whole Foods would likely argue that it was not in the same market, said Alden Abbott, an antitrust expert with the Heritage Foundation.

"Even if they did compete ... you`d have to look at the presence of (other grocery chains)," said Abbott, who argued that many Whole Foods stores are in close proximity to other grocery stores, which means antitrust enforcers might be satisfied there was adequate competition.

With Whole Foods, Amazon on collision course with Wal-Mart