Anil Agarwal, founder and Chairman of Vedanta Resources Plc, in an exclusive interview with  Zee Business, said, "I always think towards the ways to contribute back to the country and society and take it ahead". 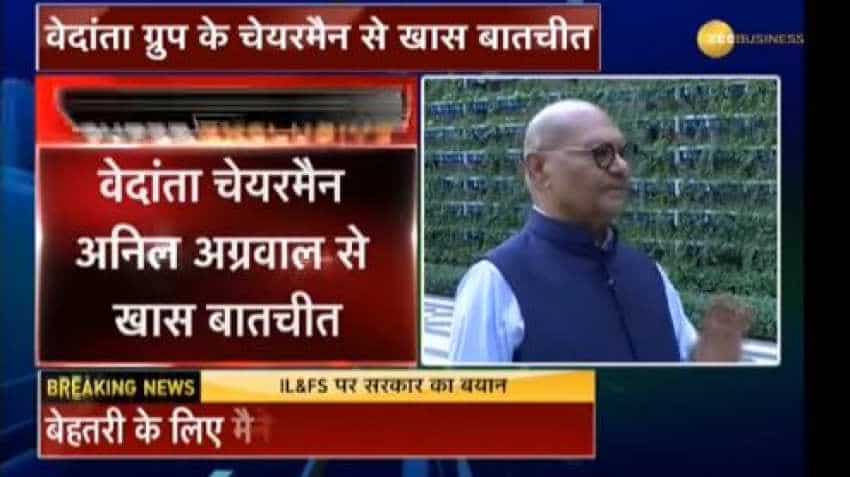 Anil Agarwal advised youths, especially women, to come out of their closet and take risks as it is an essential thing to achieve something. Image source: Zee Business
Written By: ZeeBiz WebTeam
RELATED NEWS

Anil Agarwal, founder and Chairman of Vedanta Resources Plc, in an exclusive interview with  Swati Khandelwal, Zee Business, said, "I always think towards the ways to contribute back to the country and society and take it ahead". He advised youths, especially women, to come out of their closet and take risks as it is an essential thing to achieve something. Edited excerpts:

Q: Your pledge to contribute 75 per cent of your wealth for the larger society is an inspirational thing. While studying about you, I read that you have converted a small metal business into such a big name. What is the secret of this success and how do we take inspiration from you?
A: It is the grace of God and everything is just state of mind. Secondly, every man has a skill and I try to exercise it by living within my limits. In addition, I always think towards the ways I can contribute back to the country and society and take it ahead.

India is the best place to live in but people say, why do you live in London. Then I would like to inform you that you need money for almost everything. I listed my company over there during the reigns of BJP, who assisted me a lot in the process, and brought $33 billion back to India and invested the amount in different businesses like oil, copper and zinc. I believe that Earth is a mother, like cows, who ask us to take whatever is in her lap, like gold, coal, copper and minerals, and use it for progress. I feel, India is a continent in itself when seen after adding its neighbours like Nepal, Bangladesh, Burma and Pakistan, which together constitute 25 per cent of the world's population. It is a country which has no problems related to borders like other countries of the world and has the support of its human resources, who want to work, and climatic conditions.

Q: There has been a ban on mining in Goa and similar talks are open in other states. How is the government looking at it? Can you let us know about the problems that you face while talking with the government on issues related to policies, especially minerals?
A: Governments have a direct control over businesses in socialist or communist countries like China and Russia. However, the public controls the businesses in form of corporations in democratic countries across the world including India. They own the shares of these companies, like ITC, L&T and HDFC among others, with a demand to have good and reliable people on their boards and CEOs to run it. However, there was a time, when India had trust in public sector but we have moved on from there. But the government owns nearly 250 companies still and the shares of these companies are not too attractive in terms of prices. The prices of shares of companies like SAIL can be increased by making them public and making public accountable for it. This is a kind of wealth and we must not erode the wealth when we know that people have money and are ready to invest in it.

In addition, I wish that people should have a parallel income that is equivalent to his/her monthly salary, which should be used for purposes like marriages, purchase of a house and education of their children. The parallel income should come from a legitimate path and it can be earned from stocks. I will say that the government should allow public companies to do their business. I remember that PM Modi once said that government has no business to be in business. Even former Prime Minister Atal Bihari Vajpayee had similar thoughts.

Q: Will you or your company, be interested in acquiring a company like SAIL, if government plans to privatise it?
A: We may go for acquisition of 10 to 20 per cent companies and suggest that remaining 80 per cent should go to the public.

Q:  We have also heard that you have submitted a proposal to the government with a suggestion that can help it in reducing imports and resolve the issues related to the fiscal deficit.
A: India has a potential to do so. For instance, you can take IT companies into your consideration and you will find that an Indian is heading it as its CEO may it be Google or Microsoft.

Q: Can you let us know the way in which the Vedanta group will participate in it because it is a big challenge?
A: Government has allocated 41 oil and gas exploration blocks to our group and we will try our best to work hard to make best of this opportunity and try to help reduce the country’s import dependence on oil. We have the vision to invest in India and contribute 50 per cent of India’s domestic crude oil production and offer it at $6, which is a big thing in itself.

Q: Private Investment is not coming to India and there is a negative atmosphere in relation to it. Youths are not able to find jobs due to lack of investments. Can you suggest the ways to tackle the problem?
A: There was a need for a correction and implementation of Goods & Services Tax (GST) and Insolvency Act are one of the forms of that correction. GST has put an end to leakages and Insolvency Act, which has closed the loopholes, is making people rethink before taking loans as they are aware of the actions that can be taken if they fail in depositing back the loan.
I have a suggestion for the youths of the nation that you will have to take a risk in your lifetime and appeal them, especially the girls, to come out of the closet and move ahead. Interestingly, we have 2-3 female CEOs, who are heading our projects. In addition, about 20 per cent of our employees are female and we are planning to take it up to 30 per cent.
This can be achieved by changing the atmosphere of the nation and make sure that the females are not underestimated. They have a different aspect of thinking and they have the abilities to drive. I have a faith in the next generation and feel that they will take the country to the next level.

Q: You have acquired big names like Electrosteel and had shown your interest in Essar Steel. Is there any possibility in it?
A: We have bid for it and will be able to acquire it if it qualifies. But, Anglo American is our biggest acquisition till date and we own 21 per cent of its stake. Anglo American is the world's largest producer of diamonds as it produces almost 80 per cent diamonds of the world at present. It is also engaged in the production of platinum, iron-ore and coal among others and we want to take it ahead. In addition, we are trying to convince it to come to India and start its business over here. But it fears from coming here.

Q: This is something. Interestingly, the confidence of foreign companies has eroded and they fear to invest in India.
A: It will return back as the government has made a lot of efforts and its results will be seen at a later stage. Besides, I have three goals that include taking ahead the company, adopting at least 50 crore children of India and bring women, who were married at a young age of 13-15, back to the mainstream. My company is an institution in itself, like Exon and BHP,  and will not move directly in the hands of my family members. We have started Nand Gaon project for the adoption of children and will provide essential things to them like education, food and regular health check-ups. The women will be brought back to the mainstream and start earning for their families under a project, which will be headed by Venkat, who is its CEO.