Bharat Puri revealed that there is a slowdown in the market in terms of near-term growth of all consumer goods. He also attributed the slowdown in first quarter due to elections. 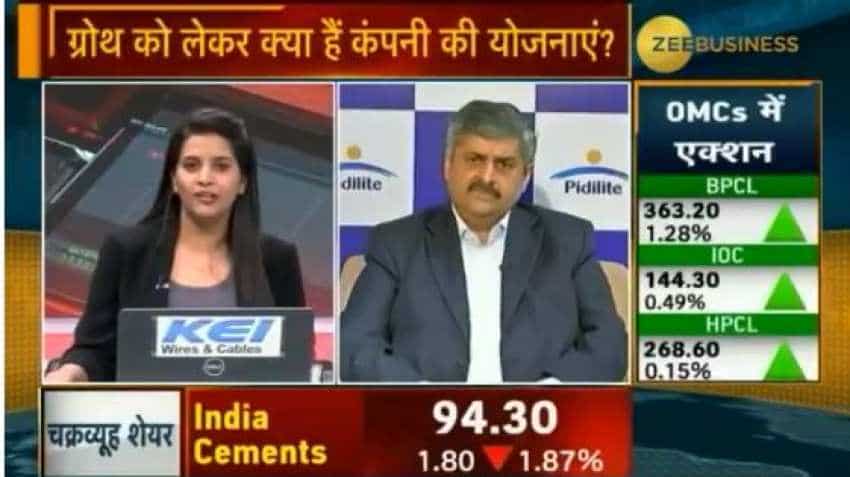 Puri said that in this quarter, overall performance across all the categories, growth was quite good and that it is in double digits. Image source: Zee Business

When asked about volume growth and the challenges, Puri said, "We don't manage business as per quarter, rather we do it as per an year. Since input costs have increased in the year, and we took pricing at the end of December, therefore, Q3 looks much better, and Q4 looks a little depressed. However, overall volume growth in the second half is 9% in consumer and bazar growth, and for the year it is 12.5% which is a very healthy."

Further, Puri revealed that there is a slowdown in the market in terms of near-term growth of all consumer goods. He also attributed the slowdown in first quarter due to elections. he said, "Frankly, in consumer goods, in more than anything else, if there is a good monsoon, we will be back to normalcy in the second quarter."

When asked about IL&FS exposure and provisioning the company had to do against it, Puri said, "Yes, in this year's account total exposure was about a little over Rs 11 crore." He added that this is why PAT is little less - one time write off to IL&FS exposure. "Now there is no exposure to IL&FS," he added.

"Since input costs have now moderated, Q1 gross margin will witness more improvement, but what will happen in the second half as far as crude and rupee movement is concerned, is that it can't be predicted," he said, and addded, "We will manage as we go along."

When asked if there is any segment where he saw a reason to be concerned about, Puri said that in this quarter, overall performance across all the categories, growth was quite good and that it is in double digits. The company's market share has not decreased rather, it has increased, said.

On updates related to new units and new plans being launched in new geographies, Puri said, "In Bangladesh, we are already a leader, as our one factory is running, and its capacity is full. In July, our second facility is also ready to start. The third facility in Sri Lanka is also gaining capacity, while our new units are also coming up in Ethiopia and Kenya."

According to the company statement, Pidilite Industries' Consolidated performance is given below: