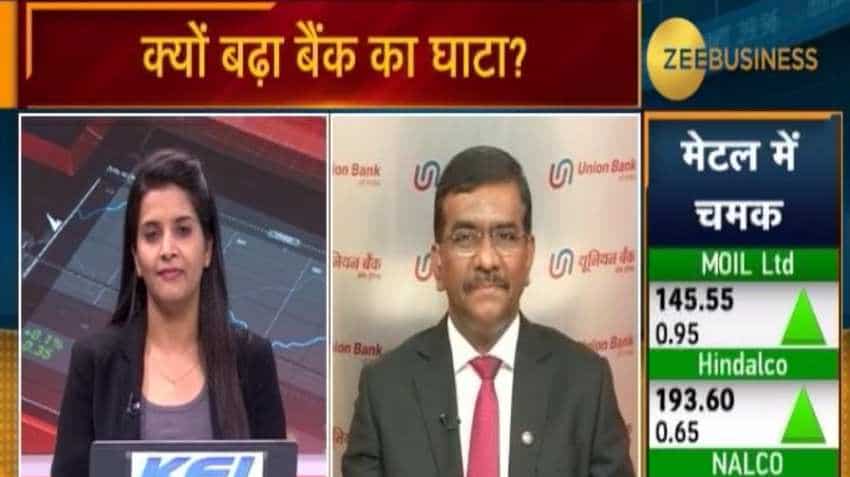 Rajkiran Rai said the Reserve Bank while auditing/inspecting, at times, pushes back the NPA date of an account. Image source: Zee Business

Q: The bank had to make additional provisioning in Q4 after the RBI inspection found the lender as under-provided also known as ‘divergence’ in banking parlance, in 2017-18. Take us through the accounts where RBI felt some problem?
A: It is a big corporate account. The Reserve Bank while auditing/inspecting, at times, pushes back the NPA date of an account. It was an already recognised NPA accounts in our case and was marked on our system. For instance, an NPA recognition date of March 2016 is pushed back to March 2015 by RBI for some regulatory reasons. So, such cases increase the provisioning requirement at our end. At times, the Reserve Bank also ask us to change and reduce the security value of the certain account that has been put into our system because it has information about it as it also audits other banks. Such actions also increase provisioning need at our end. When putting together, it has an impact of about 2,280 crores provisioning in the last quarter.

Q: How were the recovery situation in the fourth quarter and talk about expected recovery in the next few quarters?
A: Our recovery has gone up by 180% this year and went up to Rs6,400 crore from Rs2,300 crore of the corresponding year. If write-offs of Rs700 is included in the recovered amount than the recovery amount will go up to more than Rs7,000crore. It is a substantial improvement in recovery. We are expecting a recovery of Rs9,000 crore in fiscal 2019-20 of which more than Rs3,000 crore will be recovered from three NCLT accounts.

Q: Can you name the accounts or the sector from where the recovery will be made?
A: It will come from all sectors. Normal recovery comes from the retail-MSME sector plus three corporate accounts are in the last leg of NCLT – I can’t name them at present, but you are aware of them - and we expect a recovery of more than Rs3,000 crore from them.

Q: Let us know something about loan growth, which remained almost muted in the last quarter? What is the target of growth and name the segment you will focus on because there are concerns on the corporate front?
A: There is no problem with the corporate as there are good corporates, where lending is happening. Our last year’s domestic credit growth stood at 7.8 per cent and we are expecting a double-digit growth in this fiscal, which may sit between 9-11 per cent. When it comes to the sector, then we grew by more than 15 per cent and 7 per cent on retail and MSME fronts respectively. So, this time too, the growth will remain a balanced one and we are expecting a growth of more than 20 per cent in the retail segment and the corporate credit will also stand between 7-8 per cent.

Q: Update us on the capital situation of the bank and plans capital raising plans going forward?
A: There is a good redeeming feature for us because our capital position has strengthened despite incurring huge losses. We have adequate capital to absorb these high provisioning. Currently, our total capital stands around 11.8 per cent and CET-1, which is an important measure is at 8.02% whereas regulatory remains just at 7.37%. So, our capital situation is at comfortable levels.

Q: There were talks in recent past that Punjab National Bank, Bank of India and Union Bank of India have been called for the next round of merger. Can you update us on that and if we go by the news than do you think that the bank is in a position that it can take part in the merger process because your bank is lying at the early stage of recovery?
A: We have reached the provision coverage of 66 per cent, which is a decent level of provisioning and that’s why we can say that heavy provisioning pressure will not be put on us. Thus, the bank’s balance sheet is clean and strong in itself. So, we are also open but there is no such discussion. But, going forward we are also open for inorganic growth as well.