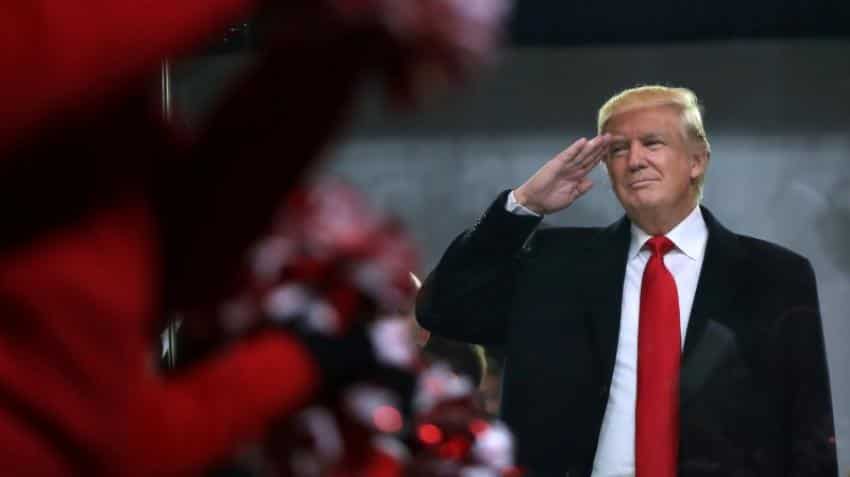 Trump has vowed to rebuild the country using "American hands" and his inaugural was punctuated with lines like Buy American and Hire American. Image Source: Reuters
Written By: PTI
RELATED NEWS

New US President Donald Trump's 'Buy American-hire American' rallying cry has put the USD 150- billion Indian IT industry on edge, which is in wait-and-watch mode to see how the new administration evolves policies around outsourcing and movement of skilled workers.

India hopes to have a meaningful engagement with the US, Electronics and IT Minister Ravi Shankar Prasad has said.

Given that US market accounts for 60 % of India's IT exports, the industry and the government here will spare no efforts in their outreach programme over the next few weeks to showcase the role of Indian technology sector in making the US economy more competitive and highlight its contribution in terms of billions of dollars paid in taxes and creation of local jobs.

"Indian IT companies are in 200 cities across 80 countries. They have added big value to the US, and given jobs to lakhs of people including American people there. I am given to understand that they have paid billions of dollars in tax... So they have added value to America in terms of money, by way of tax and also employment," Prasad told PTI in an interview just hours before Trump was sworn in as the 45th US President.

Stating that India wishes to have a meaningful engagement with the Trump government, Prasad said: "We will await unfolding of his views about Indian IT companies' outreach. We have already conveyed our views to them and we will continue (to do so)."

Nasscom President R Chandrashekhar said Trump has been pro-India and understands business realities being a businessman himself. The adverse impact on job creation within the US on account of any restriction put has to be weighed very carefully (by the new administration), he cautioned.

Communication and outreach will, therefore, be more critical, he said, adding that Nasscom is planning a visit to Washington in February to meet senior representatives of the US administration and the Congress.

Trump's 'America First' pledge, which formed the essence of his inaugural speech last Friday, has reinforced worries of protectionist posturing and unnerved the Indian IT industry which, as it is, has been battling headwinds of a slowing growth.

Trump has vowed to rebuild the country using "American hands" and his inaugural was punctuated with lines like Buy American and Hire American.

"We must protect our borders from the ravages of other countries making our products, stealing our companies, and destroying our jobs. Protection will lead to great prosperity and strength," Trump said.

Trump's hardline stance on protectionism and anti-immigration is no surprise to the Indian industry. While companies have tried putting on a brave face, concerns run deep about tightening of visa norms that will push up the cost of doing business.

Earlier this month, a Bill targeting H-1B visas was reintroduced in the US Congress by two lawmakers who said it will help crack down on the work visa abuse.

Any restriction placed by the US on outsourcing or movement of skilled workers will have far-reaching consequences for Indian firms like TCS, Infosys and Wipro. Already, companies have been preparing to mitigate the impact and have ramped up local hiring even if it means eating into their margins.

Hoping for a "business-friendly administration", Infosys chief Vishal Sikka said Trump himself is an entrepreneur and a business leader and therefore, he expects that this will be the case of business and innovation-friendly regime.

"In the near term, we do expect there will be changes to the visa and H1-B visa policies. As policies take effect, we will consider, analyse and understand their impact," he said.

The larger rival, Tata Consultancy Services (TCS), has also said it is proactively addressing these concerns by making changes to its business model.

Also, its critical to remember that most US-based companies -- including many Fortune 500s -- are deeply invested (and dependent) on Indian IT service providers and neither they nor the Trump administration is in a position to make drastic changes, he pointed out.