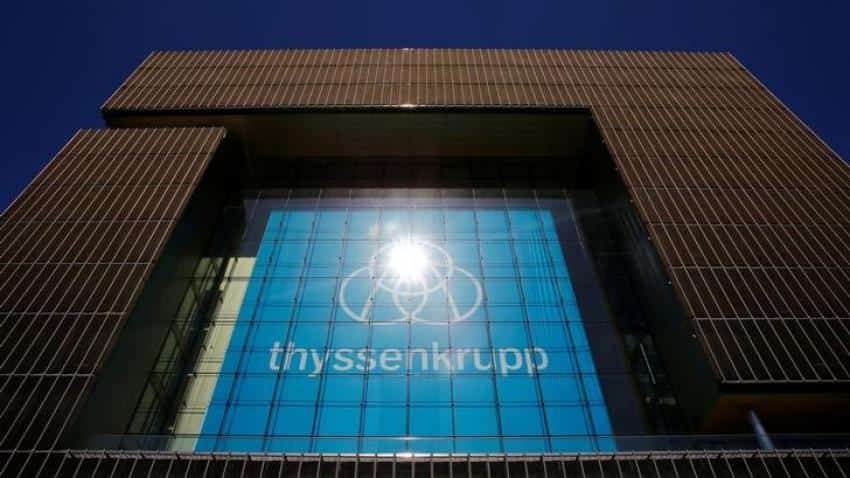 The new logo of ThyssenKrupp is seen at the headquarters of the steel maker and multinational conglomerate in Essen. Image Source:Reuters
Written By: Reuters
RELATED NEWS

Several thousand steel workers at Thyssenkrupp on Wednesday protested management's plans for a merger of its European steel business with that of Tata Steel as well as possible site closures.

Carrying banners saying "Stop steel exit" and "Steel is the future" in a rally organised by powerful labour union IG Metall, they marched to the headquarters of Thyssenkrupp Steel Europe in the industrial city of Duisburg, where the steel business's supervisory board is due to meet on Wednesday.

Steel-to-elevators group Thyssenkrupp is in talks with India's Tata Steel to merge their European steel operations, but a senior labour official at Thyssen said this month that any plan to close some plants could go ahead irrespective of whether there is a merger deal.

Thyssenkrupp has its 19th century roots in steelmaking but the sector is now being hit by lacklustre demand and cheap imports into Europe. Labour representatives fear the group wants to exit the sector at any cost, under pressure from activist investor Cevian, which owns 15% of the group.

"The workers want clarity on what is going on. They are worried," Steel Europe's works council chief Guenter Back told Reuters on Wednesday.