The biggest job cut in Tesla’s 15-year history underscores the pressure Musk is under to stop burning through money -- and start making some. So far, the company has cumulatively lost about $5.4 billion, and even most optimists don’t believe the red ink will end there. The carmaker may lose another $1.3 billion over the next four quarters, according to analyst estimates compiled by Bloomberg. 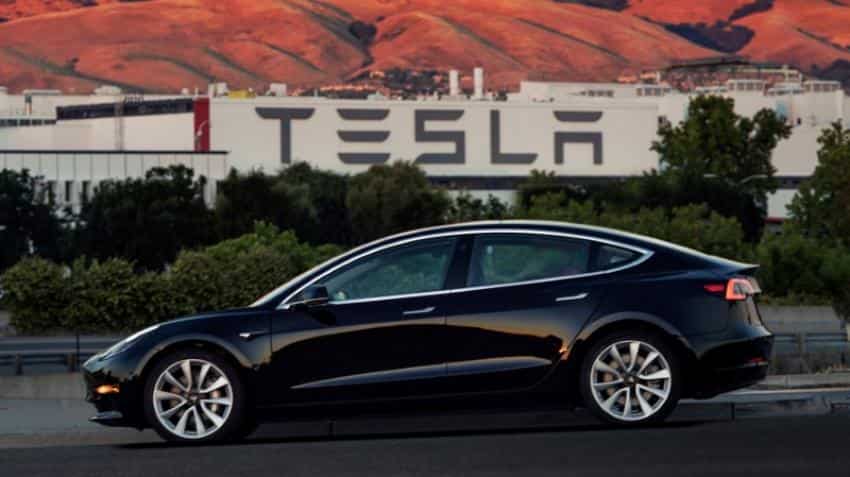 (Bloomberg) Elon Musk has finally been forced to rethink his vaulting ambitions for Tesla Inc. The news Tuesday that Musk will dismiss more than 3,000 employees, or about 9 percent of the company’s workforce, underscored what many on Wall Street have been saying for months: Tesla has reached a pivotal moment. After misjudging how quickly the carmaker would be able to mass-manufacture an electric vehicle for the first time, the chief executive officer is pumping the brakes from years of hiring at breakneck speed.

The biggest job cut in Tesla’s 15-year history underscores the pressure Musk is under to stop burning through money -- and start making some. So far, the company has cumulatively lost about $5.4 billion, and even most optimists don’t believe the red ink will end there. The carmaker may lose another $1.3 billion over the next four quarters, according to analyst estimates compiled by Bloomberg.

The announcement crystallized a restructuring Musk first alluded to when he tore into analysts who questioned Tesla’s financial straits early last month. While the CEO has steadfastly ruled out the need to raise more money this year, the company has about $1.2 billion in convertible bonds maturing through early 2019. Those obligations, combined with operating costs, may necessitate a more than $2 billion injection this year, Moody’s Investors Service said in March when it downgraded Tesla’s credit rating.

“We still have reservations on Tesla shares given production challenges, competitive threats intensifying as well as balance sheet obligations with debt quickly coming due,” Jeff Osborne, an analyst at Cowen & Co., wrote in an email. The job cuts reflect Musk’s “sudden, new-found commitment to hitting profitability,” he said.

The across-the-board cutbacks, which almost entirely involve salaried workers at Tesla’s California headquarters and beyond, are an admission that Musk’s ambition has at times exceeded the financial realities of building a car company from scratch.

In addition to spending more on righting ship with the Model 3 sedan, the company will have to shell out billions of dollars to build new car and battery factories in China and Europe -- not to mention on delivering a new crossover, sports car and semi truck in the coming years. Goldman Sachs Group Inc. analysts said last month that Tesla may need to tap capital markets for more than $10 billion in funding by 2020.

“Given that Tesla has never made an annual profit in the almost 15 years since we have existed, profit is obviously not what motivates us,” Musk wrote in an internal email Tuesday. “What drives us is our mission to accelerate the world’s transition to sustainable, clean energy, but we will never achieve that mission unless we eventually demonstrate that we can be sustainably profitable. That is a valid and fair criticism of Tesla’s history to date.”

Tesla stock has risen at a blistering pace since the company went public in 2010, driven by optimism that Musk would lead a new era of transportation innovation. In the past 12 months, amid production snags and debt-related jitters, the shares have fallen 4.5 percent, while Ford Motor Co. and General Motors Co. have climbed. The stock advanced as much as 0.9 percent in early trading Wednesday.

No production associates are included in the job cuts, and Tesla’s ability to reach its Model 3 targets in the coming months won’t be affected, Musk wrote. He said Tesla’s rapid growth in recent years led to duplicated roles and jobs the company could no longer justify. Tesla ended last year with more than 37,500 employees, 12 times its headcount five years earlier.

In addition to carrying out the staff reorganization, Tesla won’t renew a residential sales agreement with Home Depot Inc. and will focus instead on selling solar power in its own stores and online, Musk wrote. That’s a reversal from earlier this year, when Tesla-branded selling spaces started rolling out at 800 Home Depot locations.

Mass job cuts aren’t completely unheard of at Tesla. The company dismissed about 700 people last year who Musk said failed to meet annual performance reviews. SolarCity’s workforce also was significantly pared back amid Tesla’s acquisition of the company in 2016. It finished that year with about 3,000 fewer employees than it had at the end of 2015.

The latest firings may lead Tesla to take a charge of as much as $150 million for the quarter ending this month, Gene Munster, a managing partner at venture capital firm Loup Ventures, wrote to clients Tuesday. The move could save the company about $80 million a quarter in operating expenses going forward.

“In the context of the company’s high cash burn rate, $80M per quarter may not sound like enough to have an impact,” Munster said. “But as the next several months may decide the fate of the company, every dollar counts.”

Tesla will provide significant salary and vesting stock to employees being dismissed, Musk wrote in his memo. One employee who didn’t want to be identified said Tesla offered to pay his salary until mid-August and health and stock vesting until early September.

“I would like to thank everyone who is departing Tesla for their hard work over the years,” Musk said. “I’m deeply grateful for your many contributions to our mission. It is very difficult to say goodbye.”