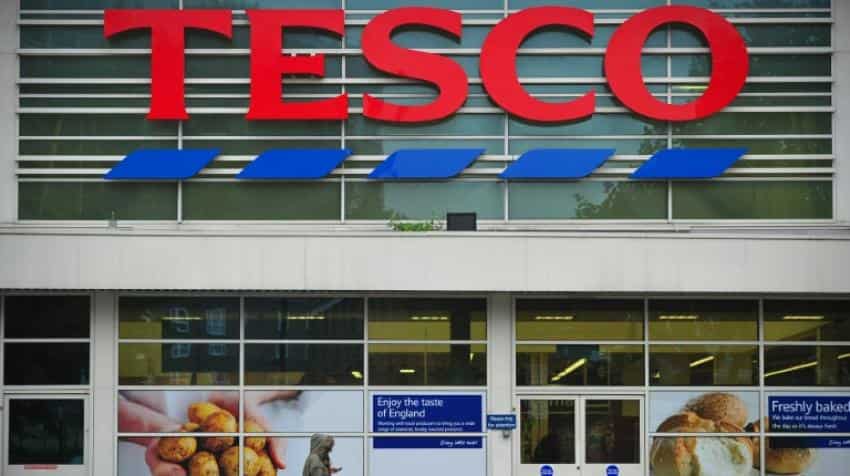 Tesco said on Wednesday it had axed prices by 6% since September 2014, in a key turnaround plan spearheaded by chief executive Dave Lewis. Image Source: AFP

Tesco, which is recovering from an accounting scandal, revealed in a results statement that it had slashed net losses in the first half of its current financial year, and posted rising underlying earnings -- and its third successive quarter of sales growth -- after cutting prices.

The firm meanwhile repeated that it was cooperating with a British criminal probe after three former executives were charged last month with fraud and false accounting.

In recent years, Aldi and its rival Lidl have boomed in Britain, grabbing valuable market share from traditional supermarkets Asda, Morrisons, Sainsbury`s and Tesco, as customers tightened their belts to save money.

Tesco said on Wednesday it had axed prices by 6% since September 2014, in a key turnaround plan spearheaded by chief executive Dave Lewis.

Lewis was parachuted into Tesco -- the world's third-biggest supermarket chain after France's Carrefour and global leader Walmart -- in July 2014 in a bid to turn around its fortunes at the group, which posted a record loss in 2014/2015.

He has since launched a deep cost-cutting drive and sold a series of assets, and outlined fresh plans on Wednesday to slash costs by another £1.5 billion ($1.9 billion or nearly Rs 12,640.23 crore, 1.7 billion euros) over the next three years.

"Tesco has invested heavily in reducing prices in the last two years, and has gradually reduced its customer exodus to the discounters Aldi and Lidl," said CMC Markets analyst Jasper Lawler.

"Both the German chains are still rapidly gaining market share but less of it is coming from Tesco, with Walmart-owned Asda notably falling out of favour."

Morrisons has meanwhile forged a tie-up with Amazon to sell products on the US online giant's Prime service, while they are also available from online delivery service Ocado alongside those from upmarket supermarket chain Waitrose.

"While Tesco continues to lose shopping trips to discounters such as Aldi and Lidl, it has managed to offset the decline by gaining share from other parts of the market, especially Asda," noted Himanshu Pal, vice president at Kantar Retail.

"However, despite the improved performance, Tesco continues to face strong headwinds as competitors ramp up their capabilities -- for example Sainsbury's acquisition and subsequent integration of Argos, and Morrisons' partnerships with Amazon and Ocado."

For its part, Aldi had announced last week that it would ramp up its British expansion, unaffected by the shock Brexit referendum, with a £300-million investment to revamp stores.

Playing discounters at own game

“Tesco is playing the discounters at their own game, cutting prices across much of their essentials range," added Philip Benton, analyst at consultancy Euromonitor International.

"The retailer is still dealing with the threat posed by discounters Aldi and Lidl that will continue to eat up market share, impacting not only Tesco but its supermarket rivals too, due to their rapid UK expansion."

Tesco added that net losses -- or losses after taxation -- narrowed sharply to £91 million in the 26 weeks to August 27, compared with £365 million a year earlier.

Pre-tax profit however slid 28.3% to £71 million in the reporting period, hit partly by the impact of price cutbacks.

In home market Britain, sales excluding petrol on a like-for-like basis -- which strips out the impact of new floor space -- surged 0.9% in the second quarter. That was the third straight quarterly expansion.

Turning to Brexit, Tesco acknowledged there would be "risks and uncertainties" arising from Britain`s looming European Union (EU) exit -- but said there would not be a "material adverse impact on the group's results" in the current financial year.