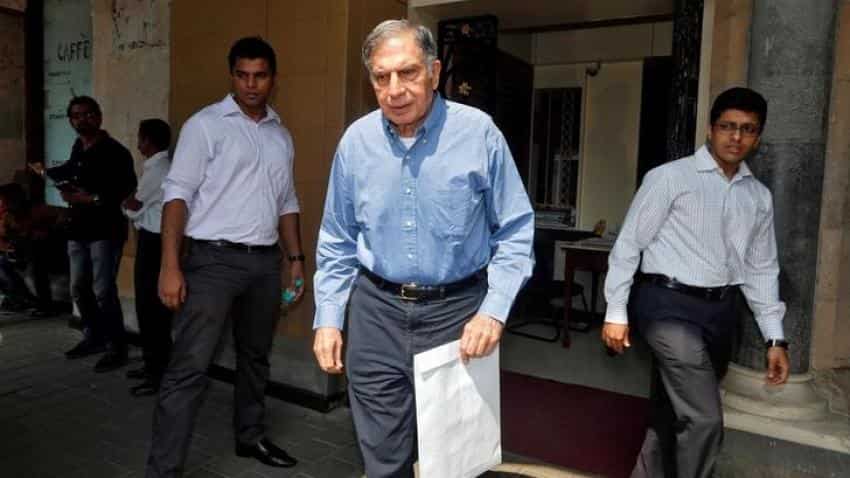 Tata Sons interim chairman Ratan Tata said that attempts have been made to damage his and Tata Group`s reputation. Image Source: Reuters

Tata Chemicals on Saturday said that a majority of its shareholders at its extra-ordinary general meeting (EGM) on Friday voted to remove Industrialist Nusli Wadia as an Independent Director of the company.

According to a Tata Chemicals` regulatory filing, over 58% of total shareholders of the company voted during Friday`s EGM.

Of the total number of shareholders who voted -- 945 or 75.67% of votes -- favoured the resolution to remove Wadia from the Board of Directors.

In contrast, 318 shareholders, or 24.33% of votes cast were opposed to the resolution to remove Wadia.

"Wadia was not present and as per his request, his letter dated December 22, 2016 addressed to the members was read out by the Company Secretary," the company said in its regulatory filing.

"On an invitation by the Chairman, lshaat Hussain representing the requisitionist, Tata Sons spoke at the meeting clarifying certain issues raised by Wadia."

Tata Sons Interim Chairman Ratan Tata also spoke at the EGM. He said that attempts have been made to damage his and Tata Group`s reputation.

"Over the last two months there has been a definite move to damage my personal reputation and the reputation of this great group," Tata said in his address to the EGM.

"And these days are very lonely because the newspapers are full of attacks, most of them unsubstantiated but nevertheless very painful. And coming here this week with all the shareholders, I have been so moved emotionally and deeply touched by the warmth, support and affection that they have shown," he said, adding he could not leave without "expressing my deepest gratitude" to the shareholders for their "overwhelming and remarkable" support.

Tata said that the group has been based on governance and fair play and he was confident the truth will prevail "however painful it may be".

The EGM was convened to decide whether or not to remove industrialist Wadia, an Independent Director of the company, from the Board.

The original agenda was to take shareholders` approval for the removal of Tata Sons` ousted Chairman Cyrus Mistry and Wadia but the former had voluntarily quit on Monday.

Tata Sons` board had ousted Mistry on October 24 and appointed Ratan Tata as the Interim Chairman.

Earlier in the day, Wadia had made an impassioned appeal to the company`s shareholders to vote with their "conscience" during the firm`s EGM, adding that he has chosen not to attend the company`s EGM, as the recent meetings of other Tata companies have been "inappropriately and shamefully stage managed".

"What is at stake now is not whether I am removed or not but the fate of the very institution of the Independent Director that has been created in law and by SEBI (Securities and Exchange Board of India) to safeguard the interests of all stakeholders," he said.

The development comes after Wadia was removed from Tata Motors` Board of Directors.

Tata Motors` in a regulatory filing made on Friday to the BSE said that over 69% of total shareholders of the company voted during Thursday`s EGM, and out of them, 1,517 or 71.20% of votes favoured the resolution to remove Wadia while 1,037 shareholders, or 28.80%, were opposed.

In response, the Wadia Group in a statement said that non-promoter shareholders had backed Wadia.

Wadia, meanwhile, on Friday filed a criminal defamation suit against Tata Sons, Ratan Tata and its Directors, barely a week after he filed a defamation suit seeking Rs 3,000 crore as damages from the Tata Group and others.

Wadia had approached the Bombay High Court, which on December 16 declined relief to minority shareholders of three Tata Group companies, who had sought restraint on promoters from voting at EGMs on the resolution to remove him as an Independent Director.

However, the court has barred Tata Steel, Tata Motors and Tata Chemicals from filling up the vacancy on the Board of Directors till further orders.

"The group has been there for a 150 years. It has been based on governance and fair play," Tata said. "I think the truth will prevail whatever the process may be, however painful it may be."

ALSO READ: Here are events of November 11 that made Nusli Wadia sue Tatas