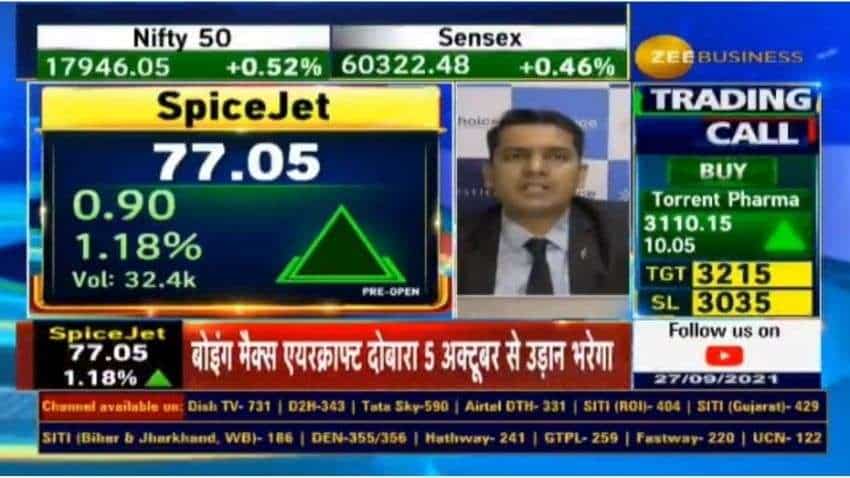 Boeing 737 MAX Aircraft was banned for flying by several countries, including India in 2019.

As the news about resumption of Boeing 737 MAX came, analyst Sumeet Bagadia, talking on the chart pattern of SpiceJet, advised investors to hold long positions. He said that the stock of the company has shown a good growth from the lower levels in last 10-15 days and then made a small correction for 2 days and is again ready for an upward move.

He added that the stocks will get support at a lower level of around Rs 70-72, while the first upper resistance will be around Rs 80. After the level of RS 80 breaks, the shares will show a level of Rs 85-90 in short term to middle term, he said.

Also, SpiceJet which had resorted to hourly-basis pay for pilots amid the pandemic, on Sunday said it has introduced a new "interim fixed salary system" for captains and first officers, as per a report by PTI.

The airline said not only will pilot salaries' "increase significantly" under the new pay structure, but those who fly more than the stipulated minimum hours will be paid overtime.

However, some pilots contested the assurance given by SpiceJet and claimed "stress" due to the continued reduction in their salaries implemented in April last year.

The pilots claimed that they were being paid a third or a half of their pre-COVID-19 salaries despite the company achieving an occupancy rate of over 85 per cent on passenger flights and being among the largest air cargo carriers during the pandemic.

The Gurgaon-headquartered airline said it had adopted a "block hour payment system" after the COVID-19 outbreak effective April 1, 2020, wherein pilots were paid based on the hourly flying rate without having to send anyone on 'leave without pay'.

"While many other airlines and organisations severed employee contracts during the pandemic, there was no retrenchment in SpiceJet," a Spicejet spokesperson told PTI.

"The migration to the block hour payment model was expected to be short-lived. However, the second wave of COVID-19 has delayed the implementation of our 'normal' salary structure," the spokesperson said.

An interim "fixed salary system" effective September 1, 2021, has now been implemented to provide better pay-out, said SpiceJet two days after it sent out an e-mail to all pilots announcing the change.

The objectives of the new system, it said, are having a pay structure that reflects fixed salary components and other relevant components.

It will also enable payment of a fixed minimum salary to all available pilots and those who fly more than the stipulated minimum hours will be paid overtime, it added.