Fare hikes are the need of the hour, says Ajay Singh, CMD, SpiceJet

Ajay Singh, CMD, SpiceJet on the new Boeing 737 Max aircraft, viability of being in aviation business under the existing situation and much more in an exclusive interview with Zee Business. 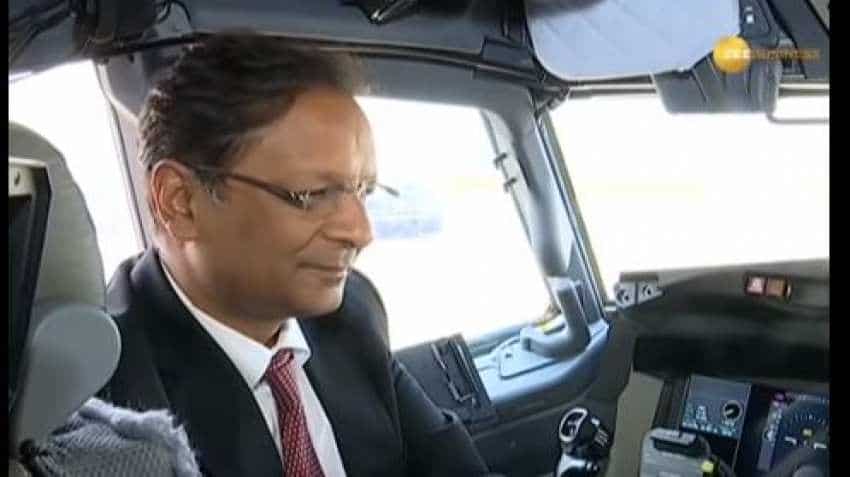 Ajay Singh said, "It is a greener aircraft. Its noise-footprint is 40 per cent less than other planes and its NO2 emissions are less by 35-40 per cent." Image source: Zee Business
Written By: ZeeBiz WebTeam
RELATED NEWS

Now, SpiceJet set to do a first in aviation, eyes new horizons; share price rocks, up 3%

Ajay Singh, CMD, SpiceJet on the new Boeing 737 Max aircraft, viability of being in aviation business under the existing situation and much more in an exclusive interview with Swati Khandelwal of Zee Business. Here are edited excerpts:

Q: You have received the first delivery of Boeing 737 Max aircraft that is extremely fuel efficient and environmentally friendly. Let us know about the features of the plane as well as future plans?
A: It is a new technology from Boeing. We have ordered 205 planes and this is the first plane. The plane comes with several special features, including the fact that it is 14 per cent more fuel efficient than the previous planes and it is the need of the hour at least when fuel prices are at their peak. It is a greener aircraft. Its noise-footprint is 40 per cent less than other planes and its NO2 emissions are less by 35-40 per cent. On consumers end, they will have a comfortable journey as it is not too noisy an aircraft.
It can fly 20 per cent farther than other planes and this facility will help us in adding a few more international destinations in our list that is available for SpiceJet. We will decide on them, the destinations, after a market study is completed. The new destinations will be announced soon.

Besides, we have a product named Max, coincidentally its name is also Max, a premium economy product with 36 seats with extra leg-room of 5-6 inches, which will enable a passenger to sit comfortably. It will also have a cushion and hot foods will be served during the flight.
This is going to be the first plane in India that will be offering broadband internet to its consumers. It is fitted with every equipment and we are waiting for the policy, which is likely to be approved by November or December 2018.

Q: You are talking about the expansion plans of Spicejet and entering into new sectors. Do you think that this business is really viable at least in the current situation, where there is a depreciation in the value of rupee and fuel prices are high?
A: I would like to say that there is a demand in the market and Indian passengers are keen to fly. As you said, the existing conditions are not too favourable as fuel prices are too high, there is a depreciation in rupee and 70% of our cost is dollar denominated.
As you said, the existing situation, which is not quite favourable is impacting the airline companies. But, the arrival of new planes will help us in reducing our costs as they are 14% more fuel efficient than the planes of the earlier generation, engineering costs on them will help us in saving 25-30 per cent expenses. In addition, we will try to reduce our costs and increase the fares in accordance with the costs, which is an essential subject to be strong in the segment. In addition, we will ask the government to go for a taxation system that is similar to the system that is practiced in big countries.

Q:  There has been talk that ATF can also be brought under GST bracket but the plan has been opposed by a few states. Do you think that this is a right time when the government should take steps to bring ATF under the ambit of GST? What is stopping the government from bringing ATF under GST?
A: See, there are two different aspects. The first one is related to the input cost that has gone up and the existing aviation fares in India are not on par with the fares of other countries. For instance, one can fly for two hours by paying a sum of $50 in India, however, a person will have to pay a minimum of $150 for a flight of 2 hours.

The second thing is that government has its own limitations but I feel that it is a necessity of the hour when the aviation turbine fuel (ATF) should be brought under GST bracket. In fact, Ministry of Civil Aviation has submitted a proposal that suggests that the government will not have any revenue loss by bringing AFT under GST bracket. Under the proposal, we have just asked to bring transparency in the taxation system so that we can pass on the same, without causing any revenue loss to the government. It will act as a structural reform in the aviation sector as under the existing system our revenues are not supported by the expenses that are made by us. Under the existing situation, our cost is the highest in the world, at present, while revenues are the lowest one.

Q: If the situation is not changed then do you think that it will be an easy to survive in this business?
A: See, strong airlines, who can reduce their costs and increase their fares will be able to survive under prevalent conditions and rest will have to go out of business. But it is a time when we all should come together to have a look at the industry as it is an important industry as it is helping in growth as well as the promotion of tourism in the country. Secondly, the kind of growth the sector has witnessed in past 4 years, the UDAN scheme and the existing environment in the aviation ministry is an achievement of the incumbent Modi government and these must not be allowed to be washed away.

Now, SpiceJet set to do a first in aviation, eyes new horizons; share price rocks, up 3%